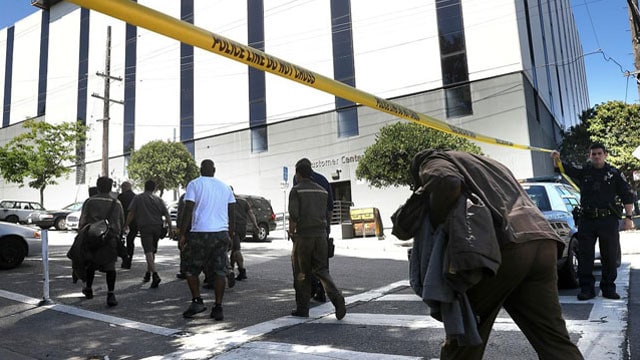 UPS workers evacuate a San Francisco facility after a shooting earlier this year that left four dead and several others injured. (Photo: NBC)

Multiple lawsuits were filed in San Francisco Superior Court Tuesday accusing United Parcel Service, a private security company, and the building’s owner of failing to take action to protect workers from what the plaintiffs deemed a preventable act when a UPS worker opened fire at the San Francisco facility earlier this year.

“This was entirely preventable,” Kevin Morrison, an attorney representing the plaintiffs, said of the June shooting that left three dead and two injured. “If Allied and UPS had done their jobs that day, we wouldn’t be here.”

Wrongful death lawsuits were filed on behalf of the widows of Benson Louie and Mike Lefiti, who were both killed in the workplace shooting. A third victim, Wayne Chan, was also killed before the suspect, Jimmy Lam, took his own life.

UPS employees Xiao Chen and Edgar Perez, who were shot but survived their injuries, filed separate lawsuits, while another complaint was filed on behalf of the 28 UPS employees who witnessed the deadly shooting. The lawsuit claims they all suffer from post-traumatic stress syndrome and many have not returned to work since the deadly rampage.

“The security lapses that led to the horrific tragedy, and the death and injury of dedicated UPS workers in the course of an ordinary workday, and to dozens of others witnessing the terrifying scene, were entirely preventable,” Morrison reiterated.

The lawsuit claims there were previous breaches in security at the facility, which included allowing unauthorized people inside the building, as well as the presence of guns, according to KTVU. In addition, the lawsuit points out that employees expressed concern about security at the facility, but the company failed to address their concerns. Furthermore, on the morning of the shooting, Lam allegedly walked through the metal detectors at the entrance as he hid a MAC-10, a semi-automatic pistol, and a box of bullets in a bag, which set off the metal detectors, but the security guards manning the metal detectors did nothing.

“Allied Universal, the security company, whose only job is to manage metal detectors and provide security guards failed to do so. Also, UPS failed to secure the building,” Morrison said.

Once inside, Lam went to a third-floor room where a pre-route morning meeting was being held, pulled out a gun and shot Louie point-blank in the head, then turned the gun on others in the meeting. Chan and Lefiti were fatally shot in the street as they tried to run away from the chaos.

Authorities still aren’t certain what drove Lam to deadly violence, but one UPS employee said in the days leading up to the shooting, Lam spoke with him about a number of personal problems, including struggling with alcohol addiction and a drunk driving conviction.

Nonetheless, Morrison called it senseless for the company to purchase and install metal detectors and hire security guards to manage them, if those measures are not utilized to their fullest capacity in order to keep workers safe.

“It’s a wake-up call, hopefully, to UPS facilities across the country to get serious about this stuff and actually do their jobs and secure the workplace,” Morrison concluded.