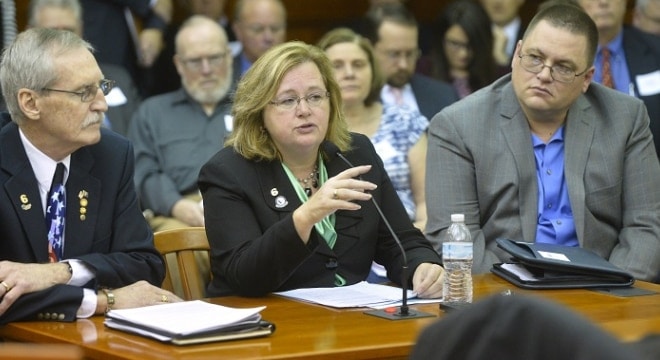 Rep. Holly Hughes, R-Montague, center, testifies before the House Committee on Local Government. Under a bill she is proposing those seeking to retain their gun rights while being foster parents would be safeguarded. (Photo: GOPHouse.org)

Republicans on Thursday introduced a bill to the state House that would ensure the constitutional right to keep and bear arms for foster and adoptive parents.

The measure, House Bill 4955, would prohibit state agencies from considering the ownership or possession of a legal firearm or pistol license by an applicant when making decisions on placing a child in foster care or for adoption. Rep. Holly Hughes, R-Montague, who sits on the Family Children and Seniors committee, said she sponsored the bill after hearing of the case of two Michigan couples who wanted to adopt but were told they would have to give up their gun rights.

“A state agency cannot be permitted to take negative action against families simply for exercising a right guaranteed to them by the Michigan and U.S. constitutions,” Hughes said in a statement.

Her bill, which was introduced with six co-sponsors this week, would keep agencies such as the Michigan Department of Health and Human Services from considering legal firearms in a home when placing children. The agency’s hazardous materials policy and licensing guidelines state that firearms must be stored in a locked metal or solid wood gun safe or trigger locked and stored without ammunition in a locked area. Further, all ammo must be locked up, all handguns registered, and all documentation made available for review by MDHHS.

According to MDHHS, approximately 13,000 Michigan children are in foster care.

“With the shortage of foster parents for kids in need, why should we keep kids from a loving home over a Constitutional right guaranteed by our country’s founders?” Hughes said.

The measure has been referred to the House Committee on Judiciary.