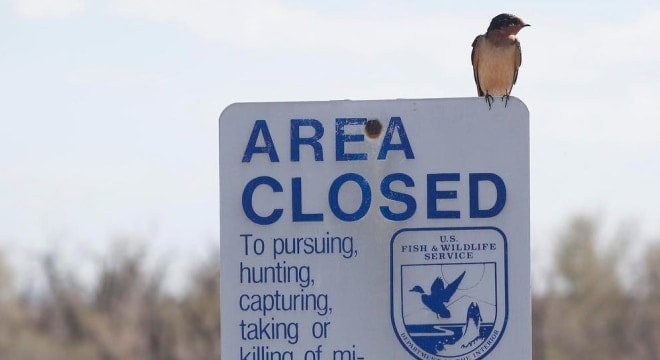 Zinke’s order directs those in charge of some 500 million acres of public lands to research opening more access to hunters and anglers (Photo: Katie Theule/USFWS)

Secretary Ryan Zinke signed Secretarial Order 3356, six pages of marching orders to the sprawling Department of Interior citing federal law and a 2007 Executive Order from President George W. Bush designed to boost flagging “sportsmen conservation ethic” in the country. The move comes days after a five-year survey by the U.S. Fish and Wildlife Service reported the number of hunters drop from 12.5 million in 2006 to 11.4 in 2016 although the general population rose by more than 30 million in the same period.

“The more people we can get outdoors, the better things will be for our public lands,” said Zinke. “As someone who grew up hunting and fishing on our public lands – packing bologna sandwiches and heading out at 4 a.m. with my dad – I know how important it is to expand access to public lands for future generations.”

Among the steps outlined in the order is for the Bureau of Land Management, National Park Service and USFWS — all of which fall under Zinke’s umbrella at Interior — to produce a plan within 120 days to expand access to sportsmen on the more than 500 million acres of public land they control. This would include amending national monument management plans to allow hunting, fishing and target shooting.

Another facet of the plan would be to establish a “one-stop” online database that the public could access for information on sporting opportunities on federal land controlled by the Interior Department, which comprises almost one-fifth of the country.

Hunters’ training and recruitment is given special attention in the order, with agencies tasked to consult their state, territorial and tribal partners to identify community programs that may be eligible for grants or could benefit from federal cooperation to help bring more people into the woods, with a special focus on engaging minorities, veterans and youth.

“At the end of the day, it’s all about ensuring that all Americans and those generations to come, have access to the wildlife and wild places that we enjoy today,” said Ducks Unlimited CEO Dale Hall.

On Capitol Hill, Idaho Republican U.S. Sen. James Risch, who is co-chair of the Congressional Sportsmen’s Caucus and sits on the powerful Senate Committee on Energy and Natural Resources, welcomed Zinke’s “quick action on behalf of sportsmen and women across the country.”

Since his Senate confirmation, Zinke has made a number of decisions impacting hunting, including repealing a ban on the use of lead ammo on public lands — a move opposed by the Humane Society of the U.S. — and announcing a proposal to expand hunting at 10 national wildlife refuges just before designating August as National Shooting Sports Month.

Gun control proponents have blasted Zinke for his support of the Sportsmen’s Heritage and Recreational Enhancement Act or SHARE Act, which includes a number of pro-gun reforms, and for appointing NRA CEO Wayne LaPierre’s wife to the board of the National Park Foundation, the Congressionally-chartered charity of the National Park Service.