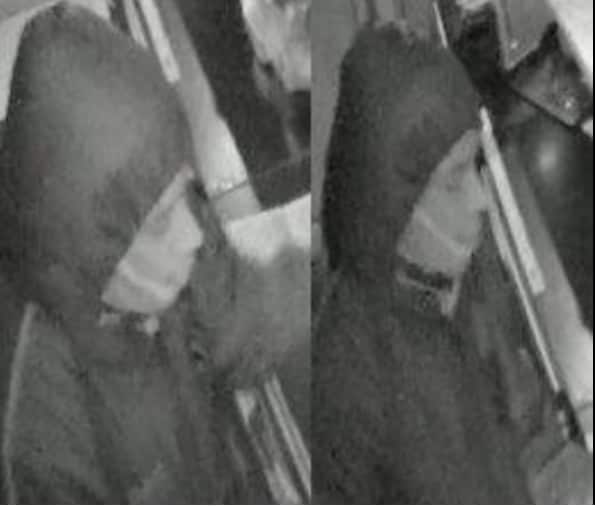 Surveillance footage captured these images of one of the suspects who stole 35 guns from a Daytona Beach pawn shop during Hurricane Irma (Photo: ATF)

Thieves broke into Volusia Gold & Diamond twice during the early morning hours of Sept. 11 through an air conditioning vent, according to a report from the Daytona Beach News-Journal.

The suspects smashed a glass case with a hammer before making off with 35 guns. Owner Gus Osta called the burglars “bastards” and “cowards” in an interview with the paper Friday.

The Bureau of Alcohol, Tobacco, Firearms and Explosives offers a $4,000 reward for any information in the case. The National Shooting Sports Foundation pledged to match the reward dollar for dollar, according to local media reports.

Hurricane Irma, one of the strongest storms ever recorded in the Atlantic Ocean, whipped through the Caribbean Sept. 6 before making two landfalls in the United States five days later — once in the lower Florida Keys and again on Marco Island, 18 miles south of Naples. The massive storm packed 130 mile per hour winds, 10 foot storm surges and a rotation of winds more than 400 miles wide. More than 3 million residents lost power across the state, including up to 90 percent of Miami. At least 26 deaths have been blamed on the storm.

It’s the second major hurricane to batter the southern U.S. in less than a month. Hurricane Harvey stalled over the Texas Gulf coast for five days in August, drenching Houston and surrounding areas in more than four feet of water. The ATF deployed SRT agents to the city to bolster security at federally licensed gun dealers vulnerable to looting.

As Irma barreled toward Florida, the agency wasted no time warning dealers and owners alike to move their inventory to safer, drier ground.

“In the storms, we’ll go back to (Hurricane) Harvey, where again, people are taking advantage of the fact that there’s no on in the home,” ATF Special Agent Daryl McCrary said earlier this month. “They’re going out, sometimes in the midst of the storm, or very soon after the storm, and they’re looting.”

An ATF spokesperson told Guns.com Tuesday the agency is still gathering information surrounding how many federally licensed dealers lost guns during the storm.