75-year-old suspect in fatal 1962 shooting turns himself in 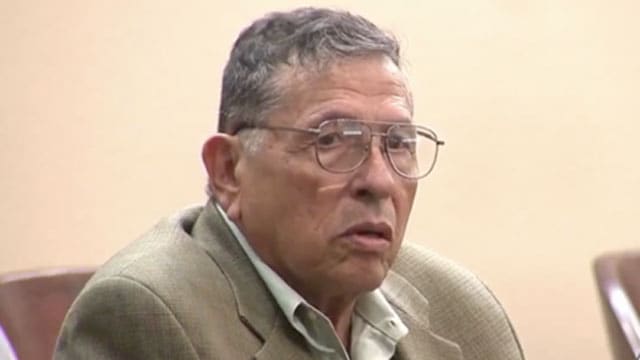 Pete Ortiz’s attorney said the elderly man was simply weary of being on the run and living under an assumed name. (Photo: KSAT)

A man who has been on the run for more than 50 years, surrendered to authorities in Texas on Wednesday.

Pete Ortiz Jr., 75, was indicted in 1963 for the murder of Joe Ovalle on Dec. 22, 1962. But Ortiz fled before he was arrested and has been on the run ever since. When asked where he has been for the last half century, Ortiz said he works all of the time, that he followed migrants to Wisconsin where he works in the fields picking cotton, according to reports from local media.

Authorities believe Ortiz and another man, Frank Luna Juarez, are responsible for the shooting death of Joe Ovalle, a self-employed painter who was gunned down in his driveway two days before Christmas 1962. According to the San Antonio Express-News, Ovalle was shot three times in the abdomen and chest with a .38-caliber handgun moments after his son walked inside.

Juarez told investigators he and Ortiz were paid $1,000 to kill Ovalle, who was allegedly an informant for federal narcotics agents. However, John Kuntz, Ortiz’s attorney, said his client had no part in the crime.

“Pete did nothing to aid, assist, abet or encourage this murder,” Kuntz said.

Juarez, who is 16 years older than Ortiz, was indicted on charges of murder with malice, and found guilty by a jury of his peers in April 1963. He was sentenced to life in prison, but has since been released on parole.

Meanwhile, the case against Ortiz went cold, but now that Ortiz is back on the radar, his case will move forward. Although Bexar County District Attorney Nicholas “Nico” La Hood acknowledged the case is a bit of an unusual one.

“We have a file. Obviously, it is an old file – it was in archives – but there’s a file,” La Hood said, adding, “There’s a challenge that comes with this. Witnesses, statements, investigations that were done back then versus now, so we’re in the process of evaluating all of that.”

La Hood said they will work to determine whether there is enough evidence to convict Ortiz, although Kunz believes there’s a strong possibility the case will be dismissed.

Ortiz was released on bond, but is required to wear an ankle monitor as he awaits his pending trial.