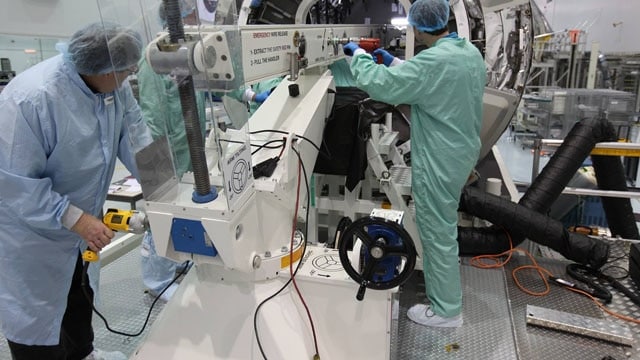 Northrop announced this week it will buy the fellow Virginia-based defense contractor for $9.2 billion, including $7.8 billion in cash and the assumption of a $1.4 billion debt. CEO and President Wes Bush said the two companies can work together to ensure the technological superiority of the U.S. and its allies “well into the future.”

“In any significant combination like this, the thing that we’ve been looking for has been the complementary nature of the technologies. And as we think about the world that’s shaping up in front of us … this issue of technological superiority for the U.S. and our allies is a real issue,” he told investors during a conference call Monday. “It’s something that our customers are struggling with. Clearly, as we watch what’s happening around our globe, the rather rapid advance of some of our potential adversaries is quite concerning.”

“There are a number of mission areas where the fit is exceptionally good,” Bush added. “Two very different sets of capabilities coming together to help our customers look at the problem in new and innovative ways.”

Orbital ATK employs more than 13,000 in the design, construction and delivery of space, defense and aviation related systems, including rocket propulsion systems, tactical missiles and ammunition — with more than 8 billion rounds produced over the last five years. The company rakes in $4.5 billion in annual revenue with another $15 billion tied up in contract backlogs, according to its website. Its stock skyrocketed nearly 23 percent Monday after news of the acquisition spread.

“It shouldn’t come as a surprise, given the geopolitical tensions bubbling up around North Korea, that missile systems are becoming hot commodities,” said Brooke Sutherland, a Bloomberg columnist, in an article published Monday. “And it’s what makes Northrop Grumman Corp.’s pricey deal for Orbital ATK worth it.”

“Orbital ATK is an exceptionally well-run company,” Bush said. “So, I have a lot confidence that bringing these two organizations together will be a good fit. I think that cultural alignment is absolutely critical. … If you fail at that, you’re going to fail at just about everything else.”

David Thompson, president and CEO of Orbital ATK, said the merger reflects the company’s “tremendous value” and said its focus remains on “making certain that during the transition period and beyond, that we don’t miss a beat in terms of operational performance for our customers and that we do everything possible to continue and to accelerate the great ideas that come from our people that are the wellspring of innovation.”