'Battle of Bunkerville' BLM agent no longer works for the agency 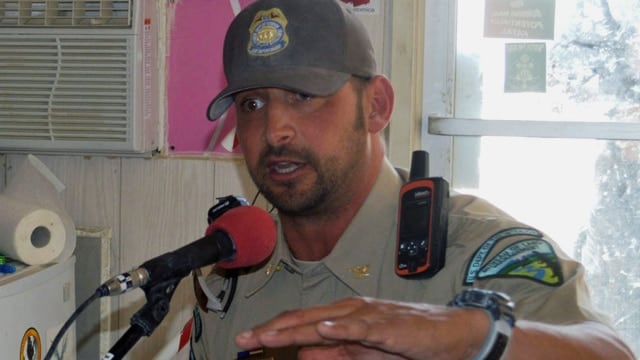 Daniel Love, a former special agent for the Bureau of Land Management, gives a radio interview during Burning Man in 2015. (Photo: BLM Nevada/Flickr)

A federal agent who had a key role in the armed 2014 ‘Battle of Bunkerville’ standoff no longer works for the Bureau of Land Management.

Daniel Love had been serving as special agent in charge for BLM in Utah and Nevada in recent years, but is no longer with the agency, according to the Associated Press.

Love still worked there on Aug. 24, when the feds released a report that said he’d handed out valuable rocks to colleagues “like candy.” The rocks, known as moqui marbles, had been held as evidence. The agency had thousands of them valued at between $160,000 to $520,000. The report said Love told a federal employee to get some of the rocks from storage so he could give them out as gifts.

Love served in a command role during the six-day standoff in April 2014 that saw BLM agents pitted against dozens of armed ranchers at Cliven Bundy’s cattle ranch in southeast Nevada. Nearly 20 people have been arrested in connection with the standoff, and several are awaiting trial.

Earlier this year, lawyers for Bundy cited a BLM report that found ethical violations for a BLM agent they believed to be Love. The report didn’t name Love, but he’s since been identified as the agent in question. The allegations stem from abuses at the Burning Man festival in Nevada in 2015, for which Love had served in a supervisory role.

“We found that the Supervisory Agent violated Federal ethics rules when he used his influence with Burning Man officials to obtain three sold-out tickets and special passes for his father, girlfriend, and a family friend,” the report says. “In addition, we confirmed that he directed on-duty BLM law enforcement employees to drive and escort his family during the event with BLM-procured, all- terrain and utility type vehicles.”

“We were deeply concerned he was manipulating the record. I’m glad they dove deep into this,” said then-U.S. Rep. Jason Chaffetz. “It’s against the law to change the federal record, particularly when you’re motivated to protect your own rear.”

The U.S. Attorney’s Office for Utah declined to file evidence mishandling charges in that instance, according to reports.