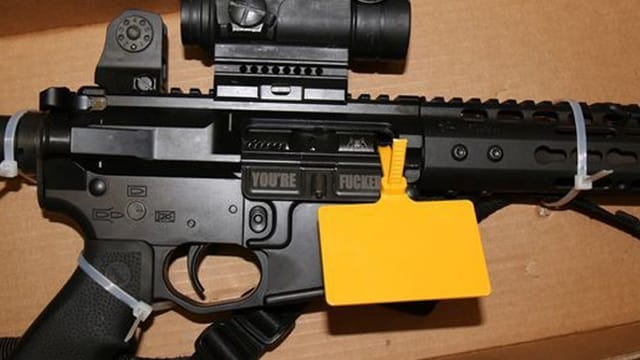 A photo of the weapon Brailsford used in the Jan. 2016 shooting. (Photo: Mesa Police Department)

A judge in Arizona has ruled that a profane inscription on the dust cover of an officer’s service rifle will not be revealed to the jury in the officer’s murder case.

Former Mesa Police Officer Philip “Mitch” Brailsford is facing a second degree murder charge in the shooting death of 26-year-old Daniel Shiver. The words “You’re fucked” had been inscribed on the weapon Brailsford used during the January 2016 shooting, according to the Arizona Republic.

Prosecutors argued those words were indicative of Brailsford’s mindset when he opened fire on Shiver, but Maricopa County Superior Court Judge George Foster ruled the evidence inadmissible, calling it “totally prejudicial” at a hearing earlier this month.

“In those eight to nine minutes, were the actions of the defendant reasonable under the circumstances?” Foster asked.

Police responded to a La Quinta Inn on that January day after calls came in about a man waving a gun out of the hotel window. Brailsford opened fire on Shiver in the hallway of the hotel, shooting him five times. Shiver was saying “Please don’t shoot me” as the officer pulled the trigger, but was also allegedly reaching for his waistband in that instant.

In addition to the dust cover issue, defense attorney Michael Piccarreta had asked Foster to keep the jury from seeing slow motion video of the incident, as well as keeping them from hearing that Shiver was unarmed when he was shot. Foster struck down those motions.

Piccarreta insists Shiver’s movements were “identical to a draw stroke.”

“The legal test that juries have to decide is whether an officer at the scene, as a reasonable person, had justification when he made that split-second decision,” Piccarreta said. “Unfortunately, Mr. Brailsford did not have the opportunity to know the future when he had to make that decision.”

Prosecutor Susie Charbel noted that five other officers in the hallway in that moment did not open fire on Shiver. “(They) had the means and the power (to shoot), whether before, during or after,” Charbel said.

“No one fired a weapon aside from Mr. Brailsford,” she said.

But Piccarreta said that officers operate on a presumption that suspects are armed until they’re frisked. He also cited a sergeant on the scene who said he’d have shot Shiver if Brailsford hadn’t been in the way.

Shiver’s widow, Laney Sweet, said she felt the rulings by the judge were fair, but that the inscription on the rifle was telling.

“I do believe the ‘You’re (f–ked)’ dust cover inscription clearly illustrated to the mindset Philip Brailsford had while working formerly for Mesa, PD,” she said in a statement.