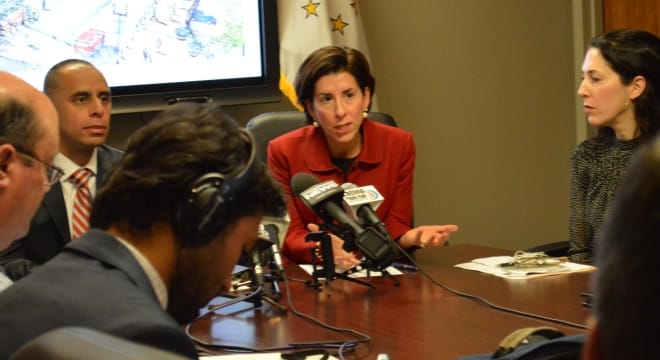 Gov. Gina Raimondo (D), seen in this 2016 file photo, will soon review a bill to seize guns from domestic abusers and those subject to protective orders (Photo: RI Governor’s Office)

The Democrat-controlled General Assembly overwhelmingly approved a measure to step up mandatory gun surrenders in cases of protective orders and domestic abuse convictions.

The bill, HB 5510, was approved 58-10 and has been championed by gun control advocates during its run through the legislature as it would prohibit gun possession by those subject to restraining orders as well as those convicted of misdemeanor cyberstalking and domestic violence.

“At last, victims of domestic abuse in Rhode Island will not have the constant fear of knowing that the person who abused them still has a gun,” said state Rep. Teresa Tanzi, D-Narragansett, sponsor of the measure. “We’ve heard countless stories from victims about flagrant threats and ceaseless fear. And we know that the presence of a gun greatly increases the chances of a domestic violence victim being murdered.”

The 17-page proposal would bar gun possession by abusers convicted of misdemeanor domestic violence crimes –including cyberstalking and cyberharassment– and those subject to court-issued protective orders, requiring them to turn their firearms over to police or a licensed gun dealer within 24 hours of conviction or being served with a restraining order.

Those prohibited from possession under the statute could later transfer their guns to a third party so long as they are not a relative or live in the same home. In some cases, such as when a protective order is lifted or expired, the former gun owner can seek their guns return through the courts.

“Although the bill is called the ‘Protect Rhode Island Families Act’ it is not about taking away guns from violent domestic abusers since the current law already does this,” said the League in a statement. “However, the bill will take away guns from non-violent misdemeanor domestic violence offenders without a conviction.”

Gun control advocates were pleased with the action by state lawmakers.

“The common-sense policies enacted in this groundbreaking legislation will help prevent gun violence and keep women and families safe,” said Jennifer Boylan with the Rhode Island chapter of Moms Demand Action, a group that has fought for the measure for the past three years. “I couldn’t be prouder that today our legislators stood with Rhode Island families, law enforcement and gun violence survivors in support of this life-saving bill.”

The proposal now heads to Gov. Gina Raimondo for consideration and would take effect immediately upon her signature.