Another hurricane, another reminder from the ATF 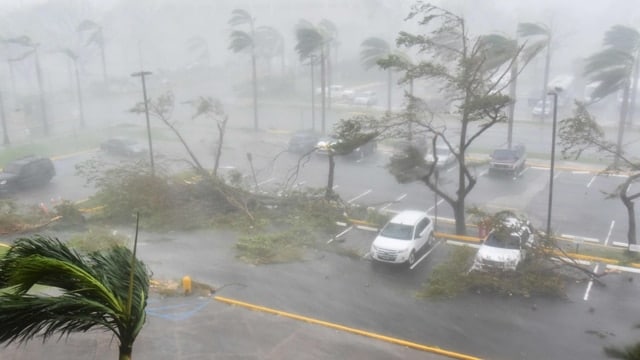 Trees are toppled in a parking lot at Roberto Clemente Coliseum in San Juan, Puerto Rico, on September 20, 2017, during the passage of the Hurricane Maria. (Hector Retamal/AFP via Getty Images)

For the third time in less than a month, the ATF is sounding the alarm for gun dealers in the Caribbean to protect their inventory from Hurricane Maria.

The category four storm tore through Puerto Rico Wednesday, with sustained winds of 155 miles per hour — strong enough to wipe out the island territory’s power grid and weather and communications systems.

“Definitely Puerto Rico — when we can get outside — we will find our island destroyed,” Abner Gómez, director of Puerto Rico’s emergency management agency, said in a midday news conference, per the Washington Post. “The information we have received is not encouraging. It’s a system that has destroyed everything it has had in its path.”

Maria comes two weeks after Hurricane Irma tore a similar path through the Caribbean, killing more than two dozen and leaving the island nation of Barbuda a pile of rubble. A week before Irma, Hurricane Harvey drenched Texas’s gulf coast in more than four feet of rain, causing unprecedented flooding in the Houston area.

ATF spokesman Joshua Jackson told Guns.com earlier this month the agency and others within the Department of Justice have deployed approximately 500 agents to Puerto Rico, the Virgin Islands and Florida, with another 500 on stand-by as needed to help in the aftermath of Irma.

“The personnel are a makeup of several different federal agencies (ATF, FBI, DEA, USMS, and others) that are agents, subject matter experts, and intelligence specialists,” he said. “ATF’s primary mission in the affected areas is public safety, providing security for FEMA shelters, and supporting urban search and rescues units. ATF and its partners will remain in the affected areas for the interim until things have stabilized.”

Some 3,200 rescue workers, government agents and National Guardsmen were still in Puerto Rico Wednesday as Maria made landfall, according to the Washington Post.

In the meantime, Puerto Rico’s Gov. Ricardo Rosselló implemented a curfew between 6 p.m. and 6 a.m. through Saturday, according to the newspaper.

“Resist, Puerto Rico,” the tweeted Wednesday as the storm hit. “God is with us; we are stronger than any hurricane. Together we will lift up.”