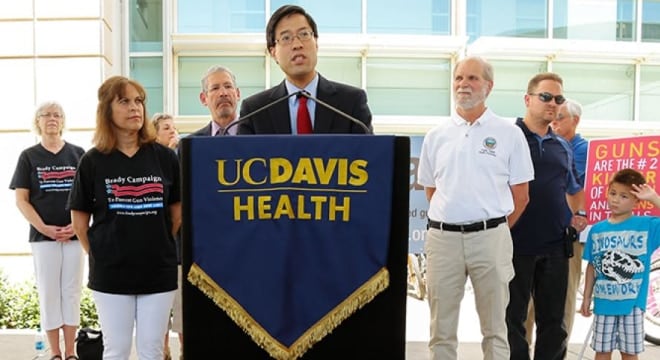 A bill ordering the California Department of Justice to funnel data to the state’s new gun violence research center is in Gov. Jerry Brown’s hands.

The measure, SB 536, which lawmakers sent to the governor’s desk last week, would mandate that DOJ share information on gun violence restraining orders with the Violence Prevention Research program at the University of California. State Sen. Richard Pan, D-Sacramento, argues the center needs access to the raw data to conduct their research.

“SB 536 will provide data so academic researchers can evaluate the effectiveness of policy interventions to better prevent gun deaths,” Pan said in a statement.

The proposal would make the data on GVRO’s in the state available to University of California researchers or “any other entity that is concerned with the study and prevention of violence,” with the latter determination at the discretion of the DOJ. The orders, which were adopted in 2014, established a framework to deny firearm possession by those believed to be dangerous in the wake of the killing of six individuals near UC Santa Barbara in Isla Vista.

“California’s GVRO policy is an important innovation that may prevent violence and is already being replicated in other states,” said Garen Wintemute, a professor and director of state’s gun violence research project. “We need to be sure that it has its intended effects, and a thorough evaluation is the way to find out. Access to records will help make that evaluation possible.”

The bill will require the state to dip into its budget to the tune of $125,000 annually to fund a research analyst position in the DOJ to collect and transfer data, as noted by the Assembly Appropriations Committee.

The measure is supported by Americans for Responsible Solutions, the Law Center to Prevent Gun Violence, the Brady Campaign, and the California Medical Association.

Gun rights groups oppose the bill, saying the framework provided to DOJ allows for unequal access to the data and that the state could play favorites to further a political agenda, describing Wintemute as a well-known gun control advocate.

“This measure ensures that only those that are ideological similar are going to have access to the data that supports this publicly funded research,” Craig DeLuz, spokesman for Firearms Policy Coalition, said. “If public data, collected by public employees, using public tax dollars to study a public policy is to be made available to anyone, it should be public.”

Besides SB 536, Brown, a Democrat, has several other measures seen as anti-gun on his desk. These include SB 464 and AB 1525 which would up storage and security guidelines while ordering a change in mandatory warnings dealers must provide with firearm purchases, and AB 7, which would expand the state’s open carry prohibition to cover shotguns and rifles carried in unincorporated areas.