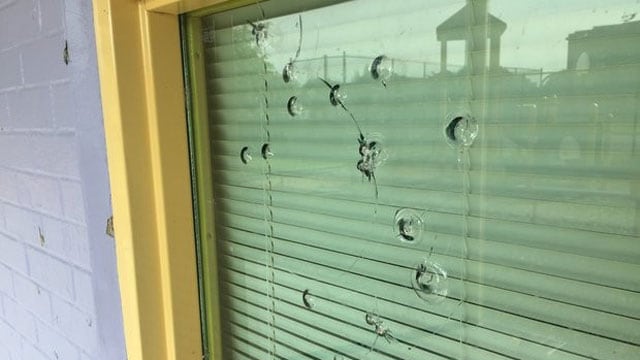 Bullets have left an array of marks on the windows of police substation in Syracuse, New York. (Photo: Chris Baker / Syracuse.com)

A police substation in Syracuse has been riddled with more than three dozen bullet holes since it first opened just three months ago.

Altogether, there are 40 distinct bullet holes on the outside of the building. Shatterproof windows have kept the panes intact, although the windows now display cracks, dents, and other signs of damage. However, there are no bullet holes near the front entrance, where security cameras are mounted.

The first marks appeared within a month of the substation opening and have continuously multiplied, but authorities say they aren’t sure how many separate incidents there have been.

“It’s hard to say how many times it happened, as there was nobody inside when it happened,” said police spokesman Sgt. Richard Helterline. “Some shots fired calls are not reported to 911, so we don’t know about them when they happen, and damage may only be noticed later.”