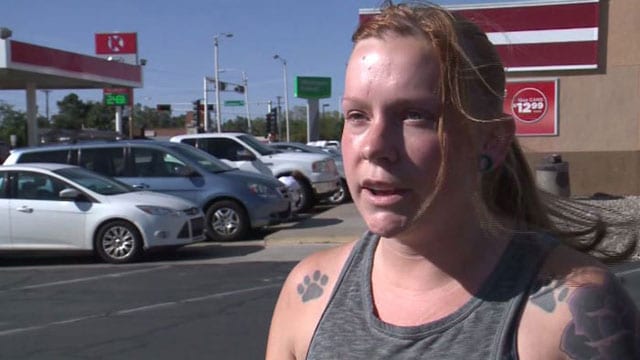 Jennifer Wertz said she’d rather find another job than work for a company who fails to protect their employees. (Photo: Tucson News Now)

A woman who shot an armed robber while working at a Circle K in Albuquerque on Monday has been suspended over the shooting, but she says she’s fed up with company’s lack of concern for employee safety and decided to quit.

“Robberies have been going on like this for the past few weeks. They have done nothing to protect me,” Jennifer Wertz told Tucson News Now the day after the robbery.

Wertz said she felt the need to protect herself, knowing that she was working a late-night shift and that another nearby convenience store had recently been robbed. So, Wertz carried a gun to work on Monday, and a few hours into her shift, she was standing near the door when a man entered the store with a gun. She said the man put the gun in her face, and she “reacted.”

“I grabbed my gun from my pocket, I cocked it, and I shot,” Wertz said.

The shot struck the suspect in the chest, and once officers responded to the robbery call, he was transported to the hospital for treatment. The suspect was identified as 23-year-old Ferron Mendez and is expected to survive. He will be charged once he’s released from the hospital, according to local media. No charges are expected to be filed against Wertz.

Wertz was uninjured, although she questions what could have happened if she wasn’t armed.

“What if he would have come in and just shot me just because I wasn’t behind the counter?” said Wertz, who noted the entire encounter lasted only about 30 seconds.

But Wertz’s take-charge attitude landed her a two-week suspension.

Nonetheless, she said she’s sick and tired of being a “sitting duck,” and would rather not work for a company with such policies. Wertz opted to quit rather than take the suspension and is now searching for another job.

Meanwhile, a Go Fund Me account has been set up for Wertz, who has three children and cares for her disabled mother.