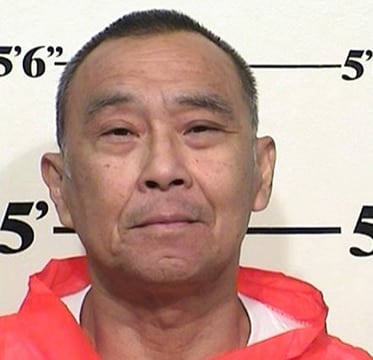 Hau Chan was convicted of second-degree murder for his role in the 1984 heist. (Photo: California DOC)

California Gov. Jerry Brown stepped in and reversed a parole board decision to release a man convicted of murder for his role in a 1984 jewelry store heist that left a Los Angeles police officer dead.

Earlier this year, the board said Hau Chan, 61, could be released from prison after serving 32 years because he showed remorse and participated in a number of prison programs. But according to the Associated Press, Brown handed down a decision last week that will keep Chan behind bars.

Authorities said Chan was the mastermind behind the botched robbery on Dec. 19, 1984. Two of his accomplices walked into the Jin Hing Jewelry store and asked to see some coins. Upon entering a safe, they pulled out guns and let in a third suspect. The owner triggered a silent alarm, and two officers arrived.

When they got there, one of the suspects pretended to be a store employee. He shot one of the officers, Archie Nagao, in the neck. He survived. Officers returned fire, killing two of the suspects. Officer Duane Johnson was also killed during the gunfight.

Chan argued at trial that he had nothing to do with the gun battle, and was outside in the getaway car during the melee. He was ultimately convicted of second-degree murder and sentenced to life in prison with the possibility of parole.

In a letter to the parole board opposing his release, police union President Craig Lally said Chan “should not receive the benefit of an early release, and be able to go home to his family, when Officer Johnson wasn’t even able to see the birth of his own daughter.”

In his decision, Brown conceded that Chan had worked to improve himself in prison. But, Brown said, he “continues to downplay the extent to which he led the planning of this armed robbery and has not confronted his actions.”