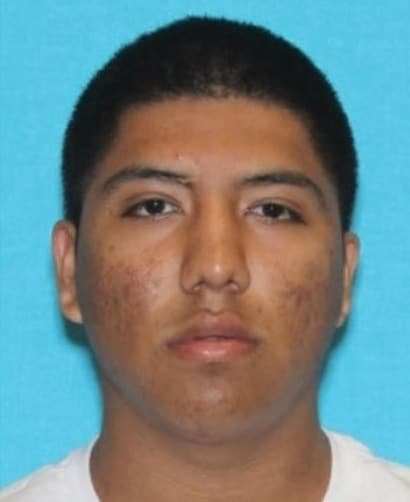 A gang member on Texas’ most wanted list was arrested in Los Angeles Tuesday after posting a Instagram video displaying his gun collection.

Christopher Ricardo Gonzalez, 18, a Texas clique member of the notorious Bloods gang wanted for violent robberies and alleged murder, was captured by Los Angeles Police officers after Dallas detectives were able to track his location when he posted the gun video to Instagram, the Los Angeles Times reported.

Gonzalez tried to escape in the SUV but eventually ran into a power pole. Gonzalez and another unidentified suspect then fled on foot and hid in a nearby yard, but the two were later found and bit by police dogs.

Woodland Hills homeowner Todd Melnik watched the end of the chase and the subsequent arrests play out in his front yard and recounted the drama to local news outlet ABC7.

“I started hearing the suspect screaming,” Melnik said. “They called the dog off of him and then they ordered him to crawl backwards from inside the bushes next to my fence, backwards onto my front lawn.”

Melnik added that he thought the police officers showed restraint in the arrests and used non-lethal rounds against the suspects.

“I thought there was going to be a shooting on my front lawn, honest to God. It was a really dramatic moment.”

Along with the murder and robbery allegations, Gonzalez, also known as “Little Chris,” has allegedly broke into several Dallas-area homes, and Dallas Police had offered a $5,000 reward for his capture.

So far, only one of the guns featured in the Instagram video has been recovered.