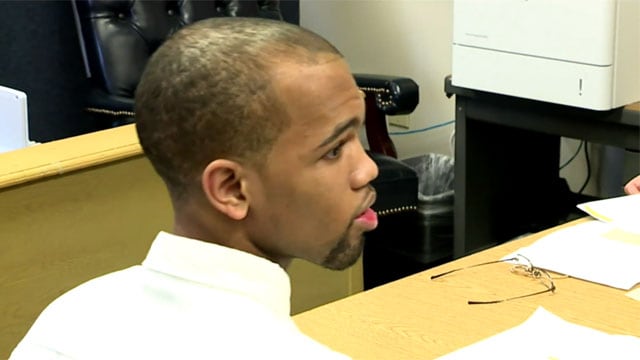 DeMarco Harris said he has changed in the last seven years. (Photo: Click on Detroit)

After spending nearly eight years in a juvenile detention facility, a man who was convicted of murder at the age of 12 was set to be freed on his 21st birthday, which was Monday.

DeMarco Harris shot and killed 24-year-old Trisha Babcock during an attempted robbery in Detroit in 2009. Harris was 12 years old at the time, 13 when he was convicted and sentenced to spend the rest of his youth in prison.

A slew of caseworkers and therapists spoke on Harris’ behalf in court Friday during a release hearing, and said he displayed exemplary behavior while incarnated, ABC 7 reported.

Jennifer Sloan, an associate clinical director, said Harris, “Not only demonstrated his growth on his own but he has over the years provided mentorship to other youth helping them grow through the process.”

Sloan also noted that Harris was assaulted multiple times while in prison and never once retaliated.

“He walked away, tried to put distance between him and the attacker,” she said.

Likewise, Harris, who could have faced life in prison, told Judge Virgil C. Smith while asking for his freedom he believes he has been rehabilitated in the last seven years.

Harris said he never thought his time behind bars would have such an impact on his life. In fact, while incarcerated, Harris earned his GED and is currently enrolled in college. In addition, he has received a number of certificates for participating in various university workshops, including nine weeks of culinary arts training.

But not everyone in court Friday felt Harris should be released. In fact, Babcock’s father, Steven, spoke out against it. Babcock accused Harris of playing the system, doing what anyone else would have done for a chance at freedom.

“My daughter’s rights and her life were taken and given to Demarco Harris,” Babcock said.

“He left her there to die. She didn’t die instantly. She was still alive, bleeding profusely and gasping for air,” Babcock added.

Babcock said his daughter is the one who deserves justice, not Harris.

“No, I don’t think he’s rehabilitated,” Babcock said of Harris. “Nobody should be granted rehabilitation after they murder somebody.”

Furthermore, Harris is not required to have further contact with the court after his release.