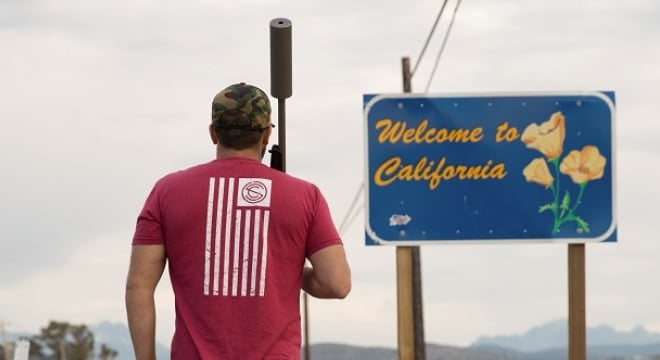 While the suppressed in-line muzzleloader can be sold anywhere in the U.S. under federal law without permits or paperwork, questions about state law have prompted SilcencerCo to back off on sales to customers in some areas (Photo: SilencerCo)

The Utah-based suppressor company on Wednesday announced they are suspending sales in three states over concerns about local laws against their moderated muzzleloader.

In a statement emailed to Guns.com, the SilencerCo said the company received “several immediate legal challenges” on the Maxim 50 from California, Massachusetts, and New Jersey, resulting in the decision in an abundance of caution to refund orders already placed from those states and halt further sales to the affected areas pending more research.

“These three states have rules that are not entirely clear with respect to firearms and silencers and antique firearms, and it is relevant to point out that no states contemplated a product of this sort in their laws,” said the company, going on to say they have “no desire to place any consumer in a situation where they may get arrested and charged with a felony because their state defines a firearm differently than the Bureau of Alcohol, Tobacco, Firearms and Explosives.”

Released Tuesday in a social media blitz, the .50 caliber muzzleloader with its permanently attached suppressor was determined by the ATF to be compliant with National Firearms Act regulations.

Shortly after the announcement, Evan Nappen, a New Jersey attorney specializing in Second Amendment cases, told Guns.com the Maxim 50 may land some in trouble in the Garden State. Under New Jersey’s strict gun laws, many have found themselves facing lengthy prison terms for such seemingly innocuous items as antique flintlocks and even BB guns.

“Muzzleloaders are firearms in New Jersey,” said Nappen. “A silencer for a muzzleloader would be prohibited and a possessor would face 18 months in State Prison and if convicted, would lose their gun rights for the entire U.S.”

SilencerCo explained that, while they asked for a determination from ATF on the Maxim 50 prior to this week to make sure it complied with federal law, they “could not do so officially from each state government or risk specific state-level legislation being passed prohibiting the product before it was even launched.”

The Maxim 50 remains available to purchasers in 47 other states while a notice posted on their social media account advises they will update customers in the suspended states “as soon as we have multiple source verification.”