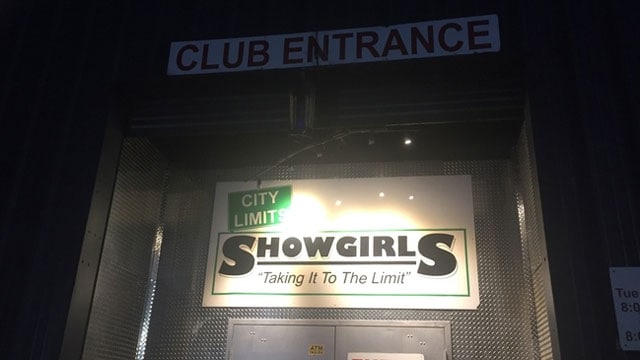 There was one lone protester at the topless carwash, which was held in the parking lot of the strip club. (Photo: Sacramento Bee)

A strip club near Marysville, California, showed a bit of community spirit Saturday by hosting a topless car wash, with all of the proceeds going to two deputies who were seriously wounded while on duty.

City Limits Showgirls collected a total of $2,565 in donations. There was a suggested donation of $15 per car, but the bigger the donation, the better the wash.

“It was excellent,” said manager Hal Meyer. “We were so busy.”

Meyer said the line of cars waiting for a wash stretched about a block. The wash took place under a large tent in the establishment’s parking lot, and Meyer confirmed that no lap dances or other extras were performed and no drivers or passengers ever got out of their vehicles.

Meyer did, however, hand out vouchers to drivers and passengers alike to come back to the club later that night with no cover charge. Meyer said of the 255 vouchers passed out, 41 were redeemed.

The donations collected from the car wash will go to Yuba County sheriff’s Deputies Phillip Bronson and Andrew Everhart, who were seriously injured in a shootout at a marijuana grow operation in August. Both deputies have been released from the hospital, but receive in-home medical care. It’s unknown when they will return to duty.

Dancers from the club said they were happy to have a chance to give back, noting that anytime there has been an issue at the club, deputies are swift to respond and act in a professional manner. Some say they feel safer knowing the deputies are just a phone call away.

The sheriff’s office said they did not endorse the event – although they didn’t publicly condone it either.