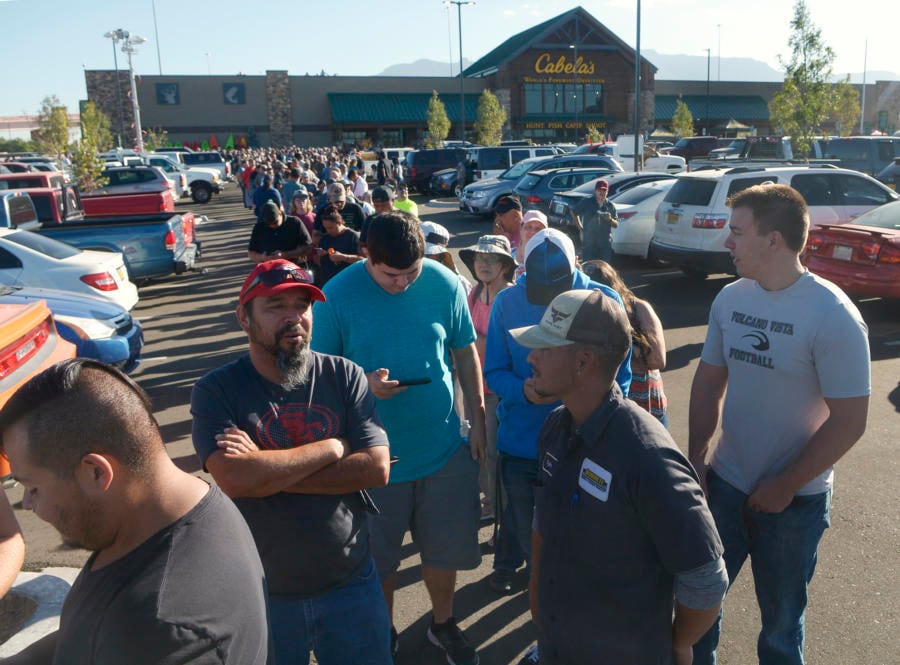 Thousands of customers stand in a line that wound its way through the parking lot to enter Cabela’s, the national outdoor outfitter, during it’s grand opening on Thursday, September 21, 2017. (Photo: Greg Sorber/Albuquerque Journal)

“We are a Cabela’s 3.0,” Tess Clark, the El Paso Cabela’s retail marketing manager, told KFOX 14 News of the 50,000 square foot store. “We are the first store of this size, gearing in on the customer experience and outfitting each of our customers for their next outdoor adventure.”

“You’re able to learn how to shoot and what you may be doing wrong,” Clark said. “It’s almost like an indoor gun range without the indoor gun range. You can try before you buy.”

“We are excited to be here,” General Manager Chris Wilson told the Albuquerque Journal Thursday. “The support from the community that we have had since the ground-breaking has been incredible.”

The new stores bring Cabela’s nationwide footprint up to 89 locations. Shares for the Nebraska-based outdoor retailer jumped by double digits earlier this month after federal regulators approved the company’s plan to sell off its consumer credit arm — World’s Foremost Bank — to Synovus Corp. as part of a $5 billion merger with Bass Pro Shops. The deal will close Monday, according to the company’s filings with the Securities and Exchange Commission.

Erik Gordon, a professor at the University of Michigan’s Ross School of Business who focuses on mergers and acquisitions, told the North Platte Telegraph last week it’s the company’s administrative positions most at risk for cuts since Bass Pro will consolidate both operations at their headquarters in Springfield, Missouri.

“The company will need a transition period to keep things running, but the long-term outlook isn’t good for people in those functions,” Gordon told the newspaper.

Cabela’s laid off 70 employees in March, though Bass Pro founder and Chief Executive Johnny Morris said he wants to retain “a significant presence” in Sydney. He has yet to elaborate on what that might mean.