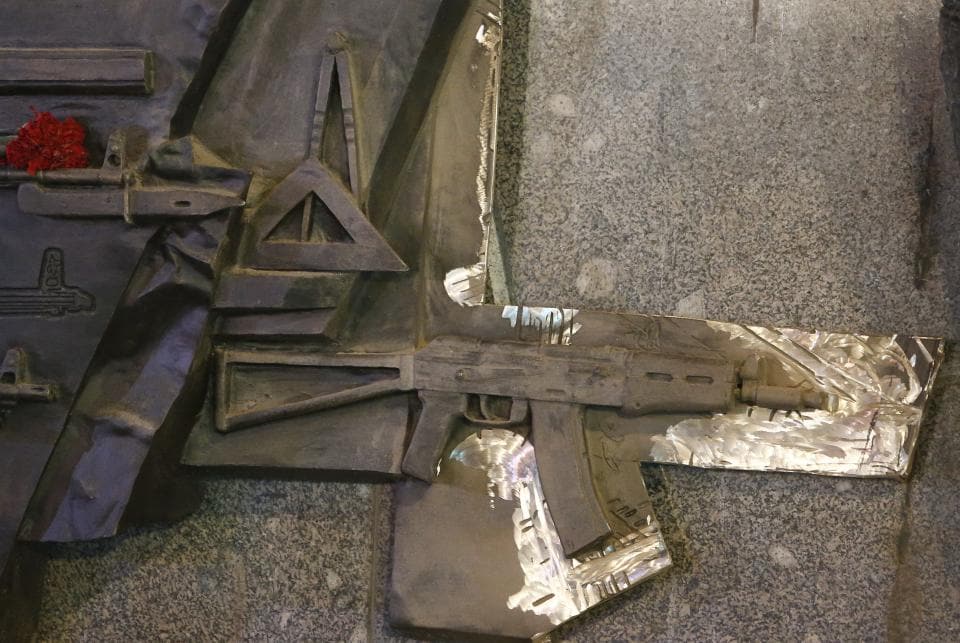 The weapon detail near the Mikhail Kalashnikov statue in Moscow, after a diagram of a German StG44 was removed (Photo: Sergei Karpukhin/Reuters)

As reported by Reuters, workers cut and ground away the offending German Sturmgewehr StG44 (MP44) rifle on Friday, leaving it a scarred memory. The gun goof was pointed out by an eagle-eyed Russian firearms enthusiast and fed fuel to the flame that Kalashnikov had help for his AK series guns from German firearms designer Hugo Schmeisser.

The sculptor of the 35 million ruble work, Salavat Shcherbakov, laid the blame for the borscht sandwich incident at the hands of the world wide web.

“We will rectify this,” Shcherbakov told state-run Rossiya 24 channel. “It looks like this (mistake) sneaked in from the internet.”

There, under the Krinkov, is a German StG44 in exploded view as it originally appeared, which would probably be OK on any monument except that of Mikhail Kalashnikov in Moscow.

The latest broadside in the “AK47 was based on the StG44” conflict brought detailed rebuttals from Russian firearms experts, though comments on Guns.com’s social media post on the issue were more in Schmeisser’s camp.

Maxim Popenker, who works for the Kalashnikov Concern and has maintained the expansive historical gun site Modern Firearms since 2000, last week penned an extensive article detailing the developmental history of Kalashnikov’s AK-46, which was largely complete before Schmeisser came to the Soviet Union and was even tested head to head against Alexey Sudayev’s 7.62×39mm AS-44 rifle, with the subsequent redesign into the AK-47 winning out due to its better reliability. Further, he holds that while Schmeisser was in Izhevsk under close custody, Kalashnikov was finishing his rifle at Kovrov which was some 900 km away and the two had no contact.

The monument, commissioned by the Russian Military and Historical Society and paid for in part by the Moscow city government, has been in the works for three years, and officials were busy making lemons into lemonade after the StG44 gaffe.

“Every cloud has its silver lining – thanks to this mistake … a myth has been destroyed that Kalashnikov borrowed some elements of his invention from his foreign colleagues,” said Vladislav Kononov, executive director of the Society.