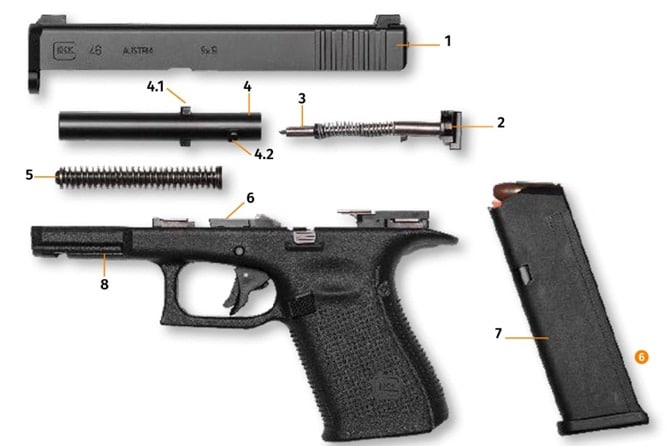 The very G19-like Glock 46 looks like a Gen 5 until you get to the barrel (Photos: Das Magazin für Waffenbesitzer via Recoilweb.com)

While this side of the pond is marveling at the differences on the new Gen 5 Glock series, over in Germany something really different has surfaced.

The German firearms industry trade journal DWJ last week announced the new Glock 46 which company CEO Stephan Dörler described as a supplement for German police forces who already use the Glock 17 and is undergoing tests at the Polizeitechnische Institut in Munster.

Following up with the highlights in English with lots of photos, Recoil detailed the new gun has most of the same Gen 5 features (no finger grooves, ambi slide stop, beveled frame nose) but that instead of either the old tilting polygonal rifled barrel or the fresh new Glock Marksman Barrel, the G46 uses a rotating barrel system. Further, as noted by Recoil, the new Glock can be field stripped without having to first pull the trigger. 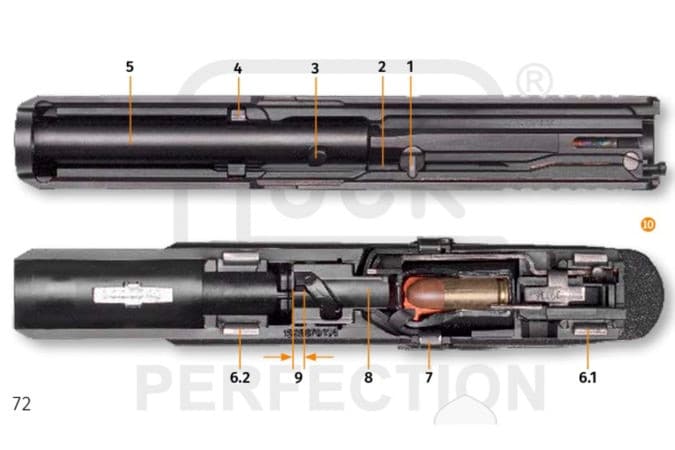 Rotating barrels aren’t new– with Beretta using them on their Cougar and PX4 Storm series most recently while older designs such as the French MAB PA 15, Steyr 1912 and Obregon pistol utilized them decades ago– but they are new to Glock. The concept is typically billed as producing a more compact handgun than a traditional tilting barrel without sacrificing accuracy.

Two patents have been taken out by Glock in recent months under designer Friedrich Dechant’s name including one for a rotary barrelled pistol.

Price for the new gun listed in DWJ was “nicht fur zivilmarkt” which means government contracts only. As for the odds of the rotating Glock making its way over here, that’s anyone’s guess.

Then again, should they be adopted by German police, they may be imported to the states as surplus guns in 20 years or so at really good prices.