SHARE Act could come up for House vote this week 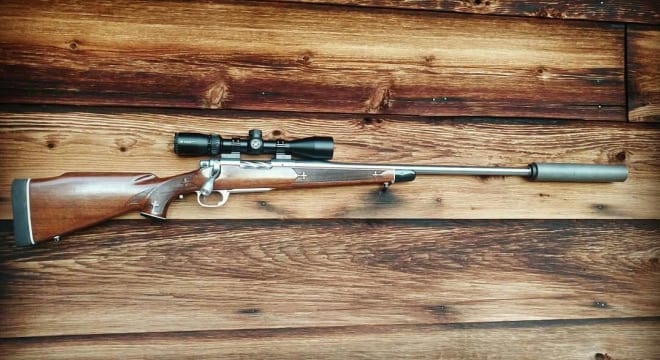 While the Sportsmen Heritage and Recreational Enhancement has 16 titled sections, it is the Hearing Protection Act that is getting the most attention from opponents. (Photo: YHM Machine)

An omnibus sportsmen’s package that includes a partial deregulation of suppressors may come up for a vote in the House in the face of strong opposition from gun control groups.

The Sportsmen’s Heritage and Recreational Enhancement Act, or SHARE Act, only has five sponsors and was introduced at the beginning of the month but was marked up by the House Committee on Natural Resources and discharged by five others last week sending it to the floor. Politico’s John Bresnahan reports the measure could be voted on as early as this week and is expected to pass.

As outlined by its sponsor, U.S. Rep. Jeff Duncan, R-SC, the package would limit the Departments of Interior and Agriculture from regulating lead ammo and fishing tackle, expand funds for public shooting ranges, open Army Corps of Engineers land to those with firearms, extend federal protections to those traveling with guns and ammo across state lines, relax federal regulator authority on firearms and ammo imports and other measures.

While ordinarily any of the above would garner objection from gun control advocates, it is Title XV of the SHARE Act, the Hearing Protection Act, which is drawing the most flak.

The language would eliminate National Firearms Act requirements for silencers and other sound moderators, scrubbing the information on more 1.3 million suppressors currently registered from the books and refunding any $200 transfer tax paid for them since Oct. 22, 2015. In the end, suppressors would be treated as Title I rather than Title II firearms – which would allow them to be transferred through any regular federal firearms license holder to anyone not prohibited from possessing them after the buyer passes an FBI instant background check.

The standalone version of the Hearing Protection Act has 163 sponsors, primarily Republicans, but has yet to be heard in committee, making the SHARE Act a quick vehicle for the bill’s passage.

“Law enforcement and military experts have told the American people and Congress they oppose this bill, and that there are very effective hearing protection devices already available on the open market,” said Brady Campaign co-president Kris Brown in a statement. “Keeping guns out of dangerous hands and stopping school shootings, ambushes of police and other mass shootings before they can start is the priority for the American people–not making it harder to detect a shooting once it starts.”

Besides the Brady Campaign, Everytown, Americans for Responsible Solutions and others are applying pressure to lawmakers. The latter group, formed by former U.S. Rep. Gabby Giffords, is spending money on targeted ad campaigns encouraging Republican lawmakers to jump ship on the proposal.

At the same time, Second Amendment organizations are urging members to blitz the Congressional Switchboard in favor of “Yes” votes on the proposal.

“The SHARE Act is critical legislation that will protect America’s hunters and recreational shooters and help preserve our outdoor heritage,” said Chris W. Cox, executive director of NRA’s Institute for Legislative Action in a statement. “This bill contains many important reforms to federal law that will remove unnecessary restrictions on our Second Amendment freedoms and hunting heritage.”

The GOP firmly controls the House, filling 240 of its 435 seats. A successful vote on the SHARE Act would send it to the Senate where Republicans hold a much tighter majority and 60 votes are needed to overcome a Democrat filibuster.