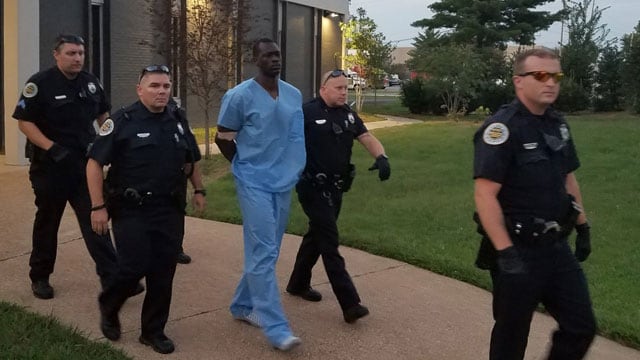 Officers escort the suspect out of the hospital and to jail. (Photo: Metro Nashville Police Department)

An usher has been credited for his heroic action by stopping the gunman responsible for Sunday’s deadly shooting at a church outside Nashville.

Robert Engle, 22, tackled gunman Emanuel Kidega Samson, 25, during a shooting spree that left one person dead and six others injured, according to a statement by Metro Nashville Police Department.

Nashville Police say Samson had two pistols and his face half-covered with a mask as he approached Burnette Chapel Church of Christ in Antioch, about 10 miles outside Music City, around 11 am. He shot and killed Melanie Smith, 39, in the parking lot and then fired shots from the building’s main entrance where he wounded six people inside the church.

Minerva Rosa, who was one of 42 people attending the morning service, told a local ABC affiliate Samson “was just shooting.” She said Samson “shot a bunch outside” then continued to fire inside all the way to the front of the church. “Our church is senior people,” Rosa said. “They didn’t make it out.”

Engle confronted Samson during the chaos and the two engaged in a struggle. Samson pistol whipped Engle in the head and at some point during the struggle, his gun discharged and he shot himself in the left side of his chest. Despite his head injuries, Engle ran out to his car to retrieve a pistol. He held Samson at gunpoint until police arrived.

“It would appear (Samson) was not expecting a brave individual like the church usher to initiate the struggle and confrontation,” Nashville Police spokesman Don Aaron told local media.

When police arrived, Samson was brought to a hospital and treated for his injuries. The victims were also transported to nearby hospitals. None of them suffered life-threatening injuries, police say.

Rosa said most of those injured suffered wounds to their legs and arms while the minister was shot in the upper chest. Rosa, who works at the VA hospital, applied pressure to the minister’s injuries until paramedics arrived.

At the scene, investigators recovered four guns thought to belong to Samson. The two Samson had on him and then another pistol and a rifle from his vehicle. Authorities charged him with murder and attempted murder, but say additional charges are likely. He is being held without bond.

Investigators are uunclear about Samson’s motive. Church members told investigators that Samson actually attended the church in years past, but had not been there in recent times. Investigators also say Samson created a number of bizarre posts on social media before the shooting.

The FBI and ATF are assisting local authorities with the investigation.