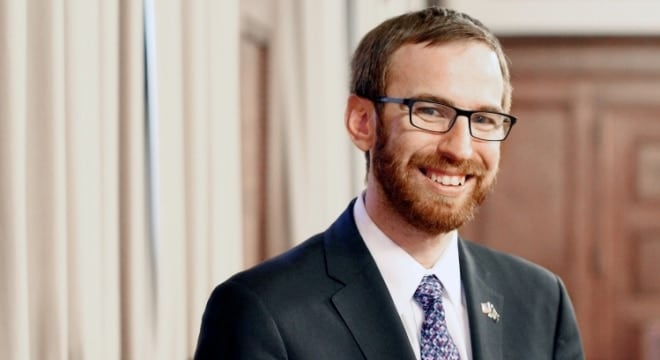 Pittsburgh Councilman Dan Gilman wants to ban guns in city parks and recreation areas under threat of a $300 fine and 30 days in jail. (Photo: cityandstatepa.com)

A Pittsburgh Democrat was so shocked by seeing firearms displayed in an area park last month that he has proposed an ordinance to the City Council to prohibit the practice.

Pittsburgh Councilman Dan Gilman observed protestors in Mellon Park including some carrying what appeared to be firearms, TribLive.com reported. While noting city ordinances regulate a host of things in recreation areas, there are no gun free zones.

“I was unaware of this until the protest,” said Gilman, who has represented the Oakland, Shadyside, Squirrel Hill and Point Breeze neighborhoods on the Council since 2013.

His solution, introduced Friday, is a proposed ordinance that would amend Pittsburgh’s city code to bar the “uncasing, possession, and use of firearms capable of discharging or propelling a projectile in City parks and playgrounds.” Those charged with the misdemeanor crime and found guilty would face up to $300 in fines or as much as 30 days in jail or both. Law enforcement officers would be exempt from the requirement.

Gun rights advocates are not impressed. Kim Stolfer, president of the group Firearms Owners Against Crime, said Pennsylvania’s strong preemption laws on firearms leave the city without the ability to establish local gun laws stricter than the state’s.

“If they do this, they are committing a criminal offense,” said Stolfer, whose group has been vindicated by the Commonwealth Court in just such a case. Last year, a 2-1 panel found in favor of the group in their lawsuit against Lower Merion Township, a 60,000-resident suburb of Philadelphia. In the end, the court held the Lower Merion’s 2011 law against carrying or discharging firearms on town-owned recreational property under threat of a $600 fine violated state preemption laws regarding the lawful possession or transportation of firearms.

Gilman’s draft ordinance has been referred to the Committee on Intergovernmental Affairs and is on the agenda for Tuesday.