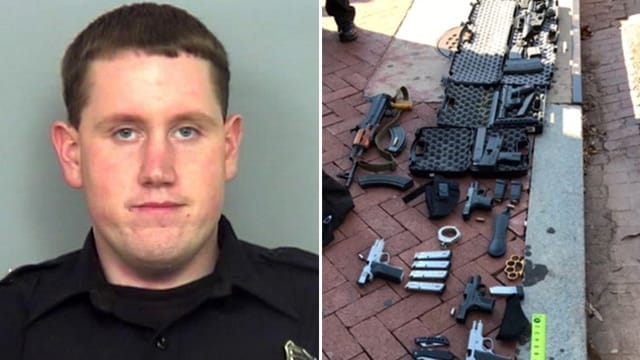 Timothy Bates, 37, told officers outside the White House that he wanted to talk to Defense Secretary James Mattis about having the microchip removed from his head. (Photo: WTTG)

A former Memphis police officer was arrested Sunday outside the White House with at least nine firearms in his car, many of them loaded.

Timothy Joseph Bates, 37, told an officer during questioning that he’d had a chip implanted in his head and was trying to talk to Defense Secretary James Mattis about having it removed, according to the Washington Post.

Authorities say a Secret Service officer saw Bates urinating near the White House around 7:15 Sunday morning. According to a police report, when asked if they could search his vehicle, Bates said, “I don’t care.”

In the trunk, officers found a Glock handgun, a Rossi .357, a .40-caliber Smith & Wesson, a Bushmaster M4, a Tec-9 with a silencer, an XD-S .45 caliber handgun, and a Norinco AK-47. Officers also found several rounds of ammo, three knives, a set of brass knuckles, and other weapons.

According to WTTG, Bates worked for the Memphis Police Department from 2000 until 2013 when he was “medically retired.” He told authorities Sunday he’d been “blackjacked” in the head when he worked at MPD. He said the Department of Homeland Security and officials in Tennessee offered him $28.7 million to participate in the “MK Ultra” project, something he said was run by the CIA.

Bates was involuntarily committed in February, and in July was observed “behaving erratically” by officers in Tennessee. He was taken to a hospital Sunday for observation before authorities brought him to jail and booked him on criminal charges. If convicted, he faces up to five years in prison and a fine of up to $5,000.