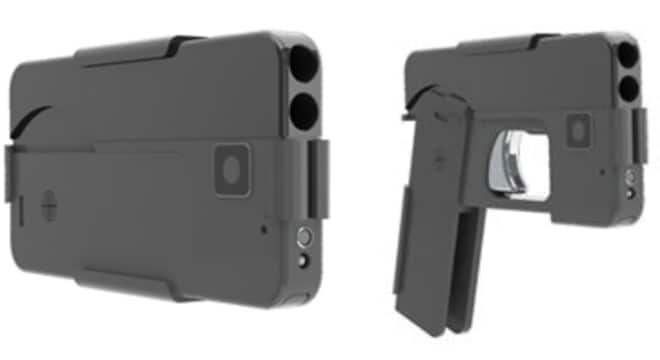 The Ideal Conceal was slated for mid-2016 production, but prototypes are floating around and it is set to start regular production by 2018. (Photo: Ideal Conceal)

Ideal Conceal’s innovative .380 that mimics a smartphone when folded is set to enter production and the company has announced tour dates to bring it to the people this fall.

The Minnesota-made double-barreled derringer made a big splash last year when it debuted and was supposed to go on sale in mid-2016 with a retail price of $395. However, Kirk Kjellberg, Ideal Conceal’s CEO, in an email Monday apologized for the missed production dates and announced a very limited run of “a few hundred” pistols would occur at the end of November followed by a 1,000-gun run in January 2018, then ramp up from there.

“February will see the same 1,000 gun production volume and March sees a jump to 2,500,” said Kjellberg. “Second quarter production will increase, but we have not picked a number for that as of today.”

Kjellberg said the company is taking their show on the road and will be holding public demonstrations starting in Charlotte, North Carolina on Sept. 27. Other dates in Winston Salem, Chattanooga, Nashville, Nashville, Memphis, Little Rock, Kansas City and Des Moines are scheduled through October with more dates set to be announced through social media.

Now you may be asking, does the gun even work? Check out the below– slightly NSFW– review posted this week by Tactical Shit on that very subject.