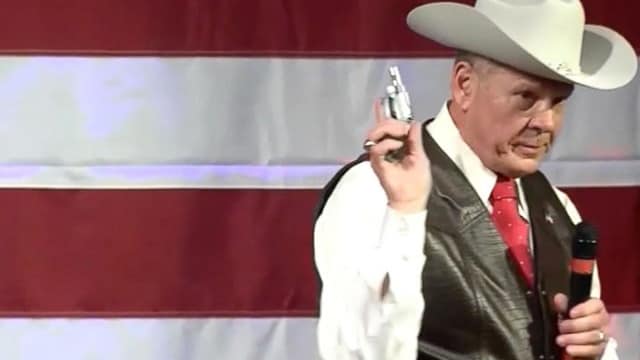 Judge Roy Moore showed off his revolver during a campaign rally on election day in Alabama.

Strange, who had the backing of the NRA and Trump, who adopted the gun lobby’s views during his campaign, vowed to support Trump’s agenda to take on the establishment and advance conservative issues.

Yet, Moore had the backing of other prominent conservatives including former Trump advisor Steve Bannon and more extreme gun rights organizations like Gun Owners of America.

The NRA spent roughly seven figures on Strange ads and to raise public doubt about Moore’s dedication to the Second Amendment.

Moore gained national recognition as a conservative when he was removed from his position as State Supreme Court chief justice in 2003 for refusing federal court orders to remove a Ten Commandments monument from his courtroom.

Moore is heavily favored in the race against the Democratic nominee Doug Jones, a former U.S. Attorney, in the general election on Dec. 12.