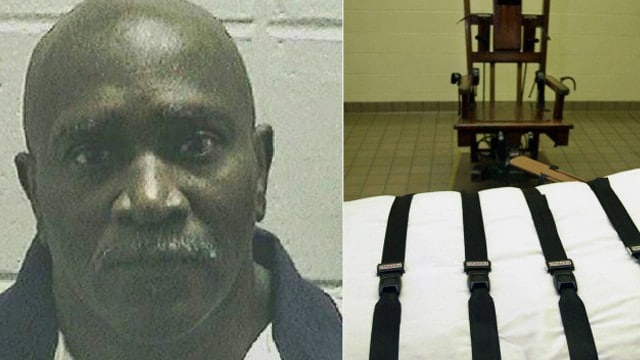 Keith Tharpe was convicted of shooting and killing his sister-in-law with a shotgun in Sept. 1990. (Photo: File/Getty)

The U.S. Supreme Court on Tuesday granted a stay of execution for a Georgia man whose attorneys argued that a racist juror helped sentence him to death.

More than three-and-a-half hours after Keith Tharpe, 59, was sentenced to die, the high court halted his execution in a 6-3 decision, the Atlanta Journal-Constitution reported. Tharpe was convicted of shooting and killing his sister-in-law in 1990.

Tharpe’s lethal injection was scheduled for 7 p.m., but officials in Georgia don’t usually carry out executions while appeals are pending. Justices Clarence Thomas, Samuel Alito, and Neil Gorsuch dissented in the decision, saying they wouldn’t have granted the stay. The Supreme Court will now determine whether to take up Tharpe’s appeal. If they don’t, the stay of execution will automatically terminate.

According to CNN, Tharpe stopped his estranged wife and her sister on Sept. 25, 1990, as they drove to work. Prosecutors said he pulled Jacquelin Freeman, his sister-in-law, out of the car, shot her with a shotgun, threw her in a ditch, and shot her again, killing her. Tharpe then raped his wife and took her to a bank to have her withdraw funds. That’s when she was able to call police.

During the appeals process, Tharpe has not denied that he killed Freeman. His attorneys argued that juror Barney Gattie “possessed profoundly racist views.” In an interview conducted by Tharpe’s lawyers several years after his sentencing, Gattie, who has since died, used racial slurs several times to describe him.

“In my experience I have observed that there are two types of black people: 1) black folks, and 2) niggers,” Gattie said.

“I felt Tharpe, who wasn’t in the ‘good’ black folks category in my book, should get the electric chair for what he did,” Gattie continued, adding, “After studying the Bible, I have wondered if black people even have souls.”

Tharpe’s lawyers argued that a biased juror violated their client’s constitutional rights. “He basically admitted his criteria for deciding to sentence Mr. Tharpe to death had much more to do with his race than any of the facts of the crime,” said Brian Kammer, Tharpe’s attorney.

Gattie confirmed that his comments were accurate and signed an affidavit under oath in 1998. But a couple days later, Gattie signed a second affidavit that said he was drunk when he gave the initial statement.

Gattie also admitted in the initial affidavit that he knew the Freeman family, something he had previously denied during jury selection. Lawyers say that’s a violation of Tharpe’s Sixth Amendment right to an impartial trial.

Attorneys have also argued that Tharpe isn’t eligible for execution because he has an IQ of 70, and federal law prohibits people with intellectual disabilities from being executed.

If the stay is terminated, Tharpe would be the 19th person to be executed this year, according to the Death Penalty Information Center.