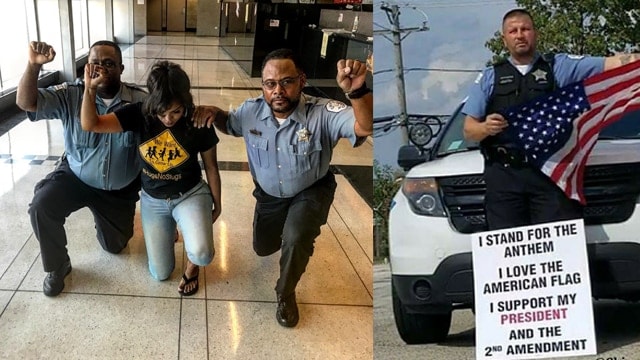 Two Chicago officers kneel and raise their fists in a photo posted to social media Sunday. Days later, another photo surfaced of a third officer holding up the American flag and standing in front of a sign that says, “I stand for the anthem.” (Photo: Instagram/Facebook)

As President Trump riles up his base, and athletes react to his words, the Chicago Police Department has become a microcosm of the national narrative this week, with two opposing protests by officers.

In the first incident on Sunday, two unnamed officers in uniform took a knee and raised their fists with Chicago activist Aleta Clark. A photo of them was posted to Instagram as sideline protests swept NFL games, a reaction to Trump’s comments a couple days earlier.

Last year, Colin Kaepernick, then a player with the San Francisco 49ers, garnered support and sparked outrage when he took a knee during the national anthem to protest police brutality.

“I am not going to stand up to show pride in a flag for a country that oppresses black people and people of color,” Kaepernick said. “There are bodies in the street and people getting paid leave and getting away with murder.”

On Friday, at a campaign rally in Alabama, Trump said fans should leave the stadium, and owners should fire the players who take a knee during the anthem. “Wouldn’t you love to see one of these NFL owners, when somebody disrespects our flag, to say ‘get that son of a bitch off the field right now’,” he said. “He’s fired!”

The president’s comments sparked several protests at NFL games, with more than 200 players taking a knee or locking arms Sunday and Monday. Back in Chicago, Aleta Clark said she wanted to see how black officers felt about police brutality.

“That Moment when you walk into the police station and ask the Men of Color are they Against Police Brutality and Racism & they say Yes… then you ask them if they support Colin Kapernick… and they also say yes… then you ask them to Kneel.!” Clark wrote in the caption of her Instagram post.

The officers were reprimanded for violating CPD’s rules of conduct, which prohibits officers from “participating in ANY partisan political campaign or activity while on duty.”

“We are aware of the photo and we will address it in the same way we have handled previous incidents in which officers have made political statements while in uniform, with a reprimand and a reminder of department policies,” CPD spokesman Anthony Guglielmi told the Chicago Tribune.

“You have a community activist who felt comfortable enough to ask police officers, so the first symbol is we’re making progress on our community relations,” said Mayor Rahm Emanuel Tuesday.

The mayor said CPD’s policy is applied consistently, but wouldn’t criticize the actions of the officers. “They were somewhat betwixt, between two different aspirations,” he said.

Then on Wednesday, there was a counter protest from another officer in the department. On its Facebook page, law enforcement group Chicago Code Blue posted an image of a white officer holding the American flag while in uniform and standing in front of a marked police SUV. “I stand for the anthem,” reads a sign in front of him. “I love the American flag. I support my president and the 2nd Amendment.”

“We commend you for your courage,” says the text above the image on the Chicago Code Blue Facebook page. “Will the mayor? That’s the question.”