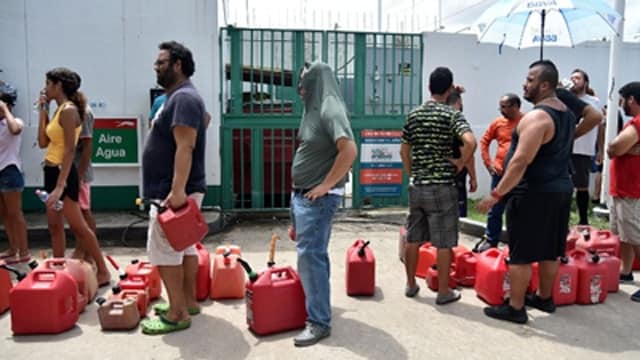 Gander Outdoors CEO Marcus Lemonis — who also operates Camping World and stars in CNBC’s “The Profit” — told his Twitter followers this week he intends to charter a cargo plane filled with supplies to Puerto Rico.

“In addition to money … we want to collect things we believe are needed,” he said Tuesday. “It’s very difficult to find out what people need in Puerto Rico. I couldn’t be more frustrated by the lack of news coverage on social media … I don’t want to see any pictures. I don’t want to read any horror stories. What I do want to hear is ideas and solutions of things that could be sent down there in addition to money.”

More than 3 million residents remain without power Wednesday, one week after Hurricane Maria — the most powerful storm to strike Puerto Rico in nearly a century — drenched the island in more than three feet of rain and killed at least 16 people. The availability of basic necessities — like clean water, food and gas — dwindles by the hour.

Aid from the U.S. is ham-stringed, local officials say, by the widespread devastation, leaving roads impassable and vital supplies stranded at the Port of San Juan.

“Right now we are in emergency mode,” Gov. Ricardo Rosselló told CNN on Wednesday afternoon. “Our focus is not necessarily restoring energy. The energy grid has been destroyed. … And we need to rebuild it. That does not get rebuilt in days.”

He told CNN he believes the federal government is “doing everything” it can to help. “Well, they are,” he said. “This is an unprecedented event. President Trump has been in close communication with me practically every day making sure we have the assets, giving orders to his team so that they can execute.”

In the meantime, retailers and private citizens have stepped up efforts to send money and supplies to the island. Lemonis’s campaign is the second of its kind he’s rolled out in less than a month. Over Labor Day weekend, he created a donation drive through Camping World to help Texans in the wake of Hurricane Harvey, pledging $500,000 of his own money to the cause. An additional $260,000 was donated at Camping World registers, of which the company matched dollar-for-dollar. All told, the campaign collected 100,000 clothing items and more than $1 million in aid for Harvey victims.

“This isn’t about anything other than a decent sense of humanity,” Lemonis said Tuesday of his plans to charter a plane to Puerto Rico. “If you hear from anybody that is familiar with this situation, this is a real catastrophe, jeopardizing humanity and really, people’s lives at stake. And every minute and every day that goes by, we are putting these people in deeper jeopardy of losing their lives, losing their loved ones. They’ve already lost enough.”