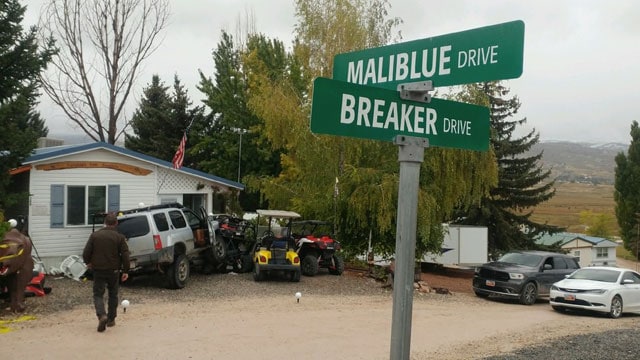 The suspect drove his SUV into the couple’s trailer home before he opened fire. (Photo: Brian Champagene / KUTV)

A preliminary investigation shows that a man thought to be suicidal was killed Sunday in Garden City, Utah, not by his own gun but by an elderly couple returning fire, according to a statement by the Rich County Sheriff’s Office.

Authorities say the couple — a 72-year-old man and 62-year-old woman — acted in self-defense when they shot Rick Bywater, 53, but they have not said why Bywater lashed out at the couple.

According to the sheriff’s office, deputies responded to a call about a suicidal man who was shooting into the home and when they arrived they found Bywayter dead and both the man and the woman suffering from gunshot wounds to the chest and abdomen. Authorities say they were shot with a shotgun from a distance and are expected to survive.

While details about the motive are unclear, Bywater was reportedly acquainted with couple and the woman was president of the neighborhood, the Sweetwater Trailer Park, where the incident occurred. Also, in the hours leading up to the shooting, Bywater apparently posted numerous rants on social media, one of which named one of the victims and said, “you pushed me to the edge.”

Kelsen Jones lives a few doors down from the couple and described them to Fox 13 as a nice and inviting couple who often liked to host trailer park-wide barbecues. Jones said the shooting left her shocked. “Garden City’s a very small town and you don’t hear about stuff like this happening,” she said.