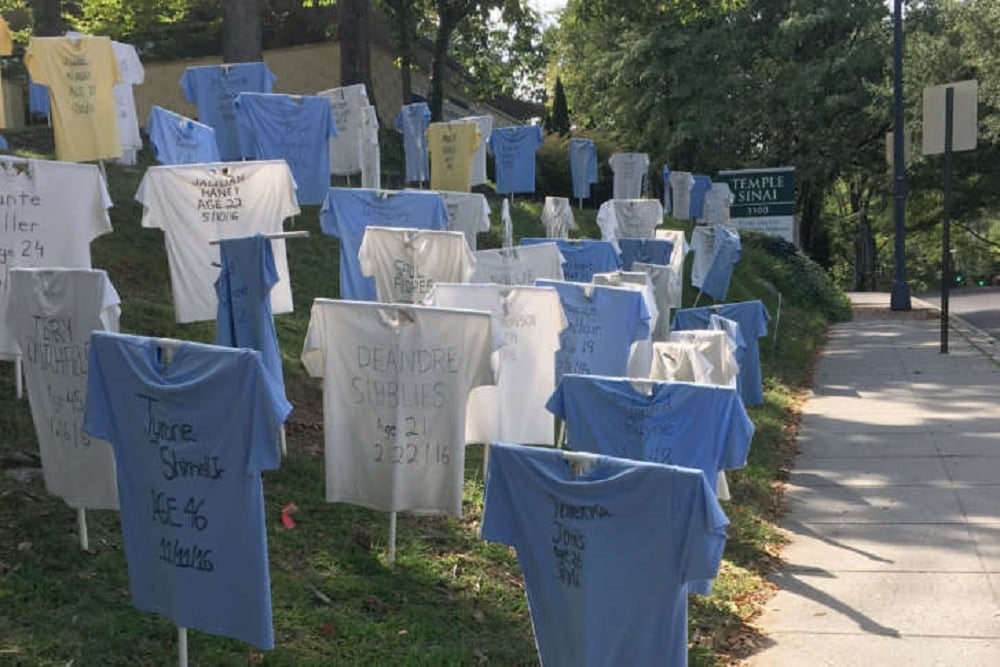 Temple Sinai’s Memorial to the Lost, meant to remember victims of gun violence, will be on display until Oct. 1. (Photo: Hannah Goldstein/WTOP)

For the second year in a row, a synagogue in Washington, D.C. has put up a display of T-shirts to honor victims of gun violence in the area.

The 205 T-shirts each show the names, ages, and dates of death for shooting victims killed in D.C., Montgomery and Prince George’s counties in Maryland and northern Virginia in 2016, NBC4 Washington reported. The memorial is located on the grounds of Temple Sinai in D.C.

Prince William County Police Officer Ashlen Guidon is among those being remembered in the memorial. Guidon was shot and killed responding to a domestic dispute on her first day with the police department.

Also remembered were Neshante Davis and her 2-year-old daughter, Chole, who were both fatally shot outside their apartment in Fort Washington, Maryland.

“Just the sheer number of them is pretty overwhelming,” Rabbi Hannah Goldstein told WTOP. “It takes your breath away.”

Goldstein also noted he thought the memorial appropriate for the Jewish high holidays of Rosh Hashanah and Yom Kippur.

“This is a time of year when we think about our own mortality, we think about the meaning of our lives,” Goldstein said. “We also think about sins, and the things that we are apologetic for, and our misdeeds in the year past. On Yom Kippur, we talk about a communal atonement, and I think this is a moment for us to see this display, and be woken up and reminded of how many people are dying in a way that we believe is preventable.”

Last year’s memorial started many difficult but important conversations, Goldstein added, and he hoped this year’s display would spur even more.

The memorial will stay on the temple grounds until Oct. 1.