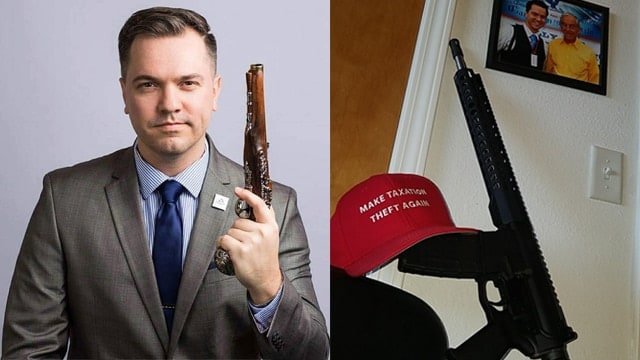 Austin Petersen was critical of Donald Trump during the campaign last year, but has toned down his rhetoric in recent months. (Photo: Facebook)

A U.S. Senate candidate from Missouri says his online AR-15 raffle resulted in a 30 day suspension from Facebook.

Republican Austin Petersen wants to unseat Democrat Claire McCaskill next year. The 36-year-old said he posted a video to Facebook criticizing McCaskill’s support for a weapons ban, but Facebook took the video down and banned him.

The AR-15 raffle is still happening, but Petersen isn’t sure why Facebook censored him. “We’re very curious,” he told the Springfield News-Leader. “We’re paying for promotion on Facebook, and we have other posts about the gun that are still up.”

Facebook prohibits the “purchase, sale or trade of firearms, ammunition and explosives between private individuals,” according to its community standards section.

“Born in Independence and raised in Peculiar — near a town called Liberty,” proclaims Petersen’s campaign website. A Libertarian, Petersen is pro-gun, pro-life, pro-free trade, pro-tax reform and wants to repeal Obamacare. But he also fights for recreational drug use, Internet privacy, and criminal justice reform that mirrors the position of Democrats.

“You don’t need to be straight to fight and die for your country. You just need to shoot straight,” he said, quoting Barry Goldwater, when he was asked about President Trump’s transgender troop ban.

Petersen has positioned himself as the “opt-out” candidate. He thinks Americans should be able to skip participation in programs like Social Security or Obamacare if they don’t want to participate. To highlight this, he’s accepting the cryptocurrency Bitcoin for campaign donations.

“Bitcoin’s disruptive influence is just what our financial system needs at this time,” he said. “For too long, the federal government has had exclusive control over currency, stymying competition and growth by falsely limiting consumer choice — a fact we would all be aware of were the Federal Reserve subject to the same kind of audits privately-held companies are.”

He’s not the first candidate to accept Bitcoin. Republican Sen. Rand Paul accepted the currency during his presidential run last year, as have at least two other politicians, according to the Wichita Eagle.

Petersen was critical of Trump during last year’s campaign, calling him nuts, and saying “If Donald Trump wins the nomination, we should revolt.”

But he’s cooled on that rhetoric in recent months, saying, “Donald Trump wants to do a lot of things that I agree with.”

Petersen will have to beat Navy veteran Courtland Sykes and retired Air Force pilot Tony Monetti in a the Republican primary next August before going on to face Sen. McCaskill, who’s seeking a third term.