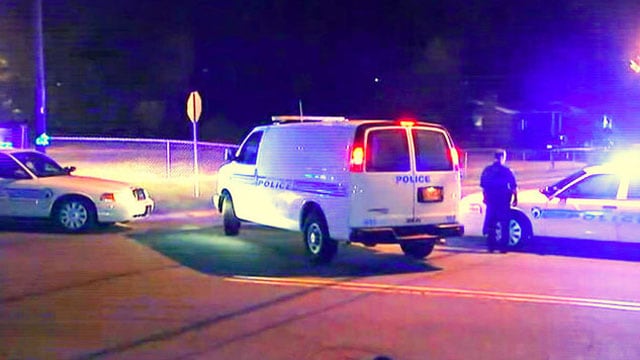 Witnesses say about 20 police cars responded to the call about the home invasion and hostage situation. (Photo: WSOC-TV)

Police officers shot a man who held a pregnant homeowner a gunpoint Monday after they caught him breaking into the woman’s Charlotte home, according to a statement by the Charlotte-Mecklenburg Police Department.

The suspect, Johnathan Autry, 28, remains hospitalized while the officers involved – Shon Sheffield, Joseph Bauer, and James Tindall – have been placed on administrative leave, as is standard protocol.

According to the statement, the officers responded to a call about a breaking and entering in progress around 10 pm. When they arrived, the found Autry holding the woman at gunpoint. They repeatedly told him to drop his weapon, but he refused. The woman was able to break away from Autry long enough for the officer to take action.

The woman was not harmed, but taken to the hospital as a precautionary measure. A child was also present during the break-in but was unharmed. Autry, however, was shot multiple times and transported to the hospital.

The preliminary investigation found that Autry and a second man forced their way into the home by kicking in the door. The second suspect — identified only as a short, heavyset black male — fled from the home before police arrived and currently remains at large.

Police say the attempted robbery was not random even though the woman was not acquainted with the suspects. During the incident, Autry repeatedly used the woman’s husband’s name while demanding money. The husband, however, was not home at the time. Authorities have not said what, if any, connection there is between the woman’s husband and the suspects.

Authorities say Autry, who had three outstanding warrants, will be charged with first-degree burglary, first-degree kidnapping, robbery with a dangerous weapon, and possession of a firearm by a convicted felon.