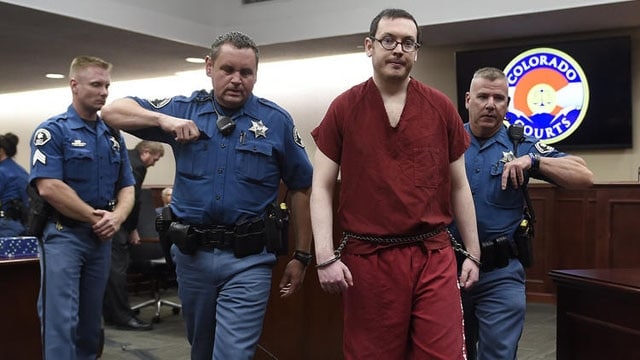 Colorado theater shooter James Holmes is led out of the courtroom after being formally sentenced in Centennial, Colo., on Aug. 26, 2015. (Photo: RJ Sangosti/The Denver Post via AP)

The man convicted of killing 12 people inside a suburban Denver movie theater in 2012 will serve his life sentence at a federal prison in north central Pennsylvania, according to a report from CBS News.

The Federal Bureau of Prisons finally disclosed the location of James Holmes, now 29, more than a year after transferring him out of Colorado State Penitentiary in Canon City. Colorado Corrections Department officials said the transfer would protect Holmes from further attacks from other inmates, who targeted him “due to the high profile nature of his crimes.”

“The State sought to place the inmate in the Federal System several months ago, but placement required finding space at a facility that could provide appropriate security,” the department said in a news release, per the Denver Post. “That space recently became available and the move to the Federal prison was secured.”

Records show he now resides at the United States Penitentiary in Allenwood, a high security prison, about 80 miles south of the New York border.

Holmes opened fire during a midnight showing of The Dark Knight Rises on July 20, 2012 at a movie theater in Aurora, Colorado, killing a dozen people and wounding 70 others. Unconvinced by his insanity plea, a jury convicted him on 24 counts of first-degree murder, 140 counts of attempted first-degree murder and one count of possessing explosives. He was sentenced in 2015 to multiple life terms.

“I’m pleased that after all these many, many months of obfuscation by the state government here that these family victims are finally going to get the peace of mind, knowing that the guy who murdered their loved ones, they’ll know where he is,” Arapahoe County District Attorney George Brauchler, the lead prosecutor in the movie theater shooting case, told the newspaper Wednesday. ““There is no longer any reason for the Department of Corrections to not disclose where he was. I’d like to know what the conditions were.”