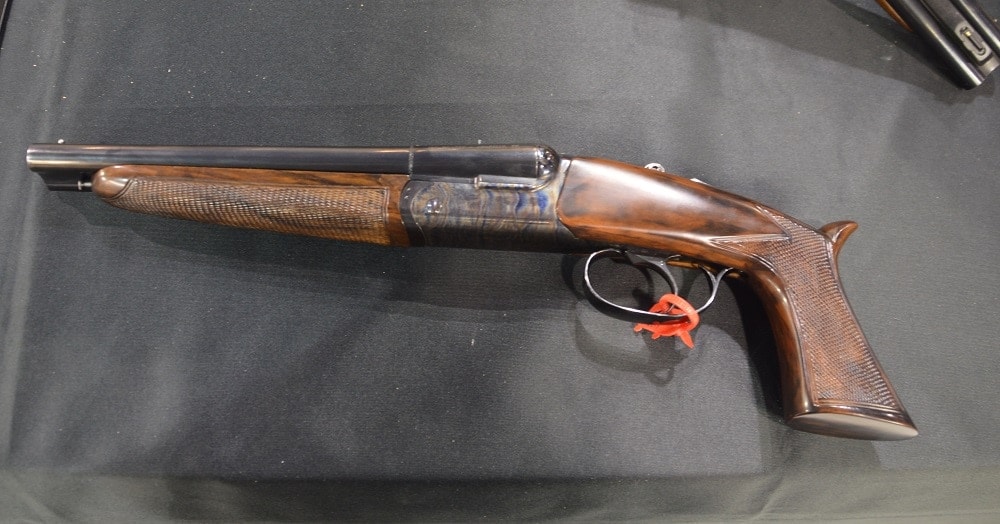 The Pedersoli Howdah .45/.410 is an NFA-compliant repro of a Prohibition-era 12-gauge pistol killed off by the NFA. (Photos: Chris Eger/Guns.com)

Italian Firearms Group announced it will begin importing and distributing Pedersoli’s Howdah chambered in .45 Colt and .410.

A double triggered, breech loading reproduction of the Auto & Burglar pistol made by Ithaca in the 1920’s, the Howdah comes to the U.S. completely legal and NFA tax stamp free.

Boasting rifled 10.25-inch barrels, the gun is furnished with a ramp front sight and folding rear leaf sight. The rear trigger handles the left-side barrel and the front trigger fires the right side barrel. Both triggers are said to break cleanly, hovering around the 3.5 pound mark.

The hand-checkered American Walnut grip is designed to rest snugly into the hand, allowing for more control while shooting. The receiver is case colored while a fine checkering pattern covers the unlocking mechanism.

The pistol is based around the muzzloader, flintlock Howdah pistols carried by African and Indian hunters in the early 19th century. Equipped with either two or four barrels, the guns were used for close defense against dangerous game.

The Ithaca Gun Company introduced the Ithaca Auto & Burglar side-by-side pistol with a 10-inch double barrel in .20 gauge in 1922. It was intended to remain in a car or truck as a means of self-protection against highwaymen. The Pedersoli Howdah intends to continue the legacies of these firearms.

The Howdah comes to the consumer market with a MSRP of $1350.