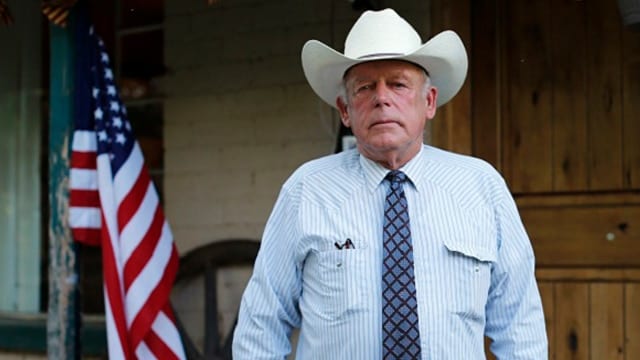 Cliven Bundy in front of his home on his 160-acre Nevada ranch in 2014. (Photo: Mike Blake/Reuters)

A judge denied Bunkerville rancher Cliven Bundy’s request Wednesday to fire his lawyer and represent himself.

U.S. Magistrate Judge Peggy Leen asked Bundy whether he was ready for the trial, set to begin in a couple weeks. “Well I doubt it,” he said, according to the Las Vegas Review-Journal.

Bundy and five other men face a slew of charges related to an armed standoff more than three years ago that started when Bureau of Land Management agents came to collect Bundy’s cattle in lieu of a million dollars in backed grazing fees. Dozens of people came from all over the country to support Bundy. Nearly 20 people have been arrested and charged in connection with the standoff.

“Mr. Bundy has demanded that this present request be made,” wrote attorney Bret Whipple last week in a motion to withdraw from the case.

“It is unknown to undersigned counsel at this time whether or not Defendant Bundy seeks to represent himself at trial, or if he has some other intent in regards to securing alternative counsel,” Whipple wrote. “Given this circumstance, the Court should hold a hearing with Defendant Bundy present to inform the Court of his intent.”

Following through on that motion, Leen this week asked Bundy about his understanding of trial procedures. “I understand very little of it, but I reserve my right to do the best I can,” he said.

As she read through the charges against the rancher, she decided that Whipple will continue to represent Bundy. His son, Ryan, is already representing himself. His standby attorney, Angela Dows, filed a motion to withdraw earlier this month, citing “repugnant” communication from her client, and a “fundamental disagreement” between them.

“Mr. Ryan Bundy is under the mistaken impression that instant counsel can be forced by Mr. Ryan Bundy to affirmatively do whatever he wants done outside of the role of advisory/standby counsel, and in the time/place/manner he chooses,” wrote Dows, adding that Ryan Bundy asked “counsel to violate the rules of professional conduct.”

At a hearing last week, Judge Gloria Navarro wrote that she was “inclined to deny” the motion from Dows, but delayed a ruling on the matter because Ryan Bundy wasn’t present in court during the hearing. Dows remains his standby counsel.

The trial, set for Oct. 10, will be the third trial in the ongoing Bunkerville proceedings. Cliven Bundy, Ryan Bundy, Ammon Bundy, Ryan Payne, Pete Santilli, Scott Drexler and Eric Parker will all be tried this go around.

Drexler and Parker have faced two previous trials. In April, a jury deadlocked on charges against them. In August, they were found not guilty on a handful of charges, but the jury couldn’t decide on four counts for Parker, and two for Drexler. In that same trial, two other defendants – Montana native Richard Lovelien and Idaho resident Steven Stewart – were acquitted of all 10 counts against them.

In the April trial, Bunkerville defendants Gregory Burleson and Todd Engel were found guilty. Burleson was sentenced to 68 years behind bars. Engel is still awaiting sentencing. Another man, Jerry DeLemus, pleaded guilty to charges and was sentenced to seven years in prison for his role in the standoff.