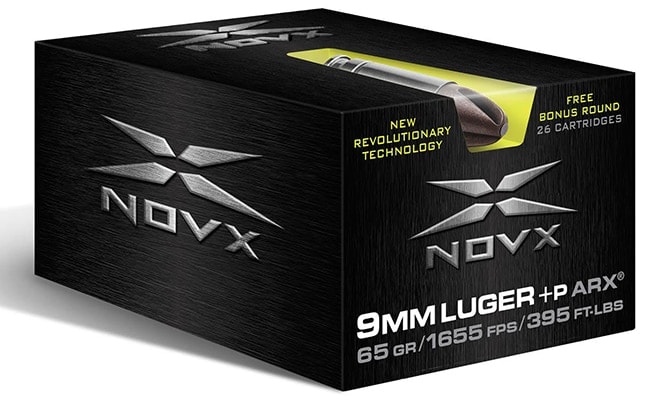 The rounds are a totally new design, combining the intellectual properties of a polycarbonate/copper ARX bullet with Shell Shock Technologies stainless steel casing and aluminum primer base. The ammo operates on the principle of Aero and Fluid Dynamics, not hydrostatic shock or mushrooming.

“NovX 9mm ARX Engagement: Extreme Self-Defense ammo produces 20 to 30 percent higher velocity than standard ammo and is extremely accurate. Both new and seasoned shooters will appreciate the 20 to 30 percent less felt recoil aiding in faster target re-acquisition times. Law Enforcement and government professionals benefit from the 40 to 60 percent weight reduction versus standard ammo when in the field,” the manufacturer said in a press release.

In addition to offering the ARX Engagement, NovX also dropped the 9mm RNO CrossTrainer. Utilizing Shell Shock Technologies SST case paired with a round nose projectile bullet, the CrossTrainer aims to give shooters quality ammo to train or use during competition or recreational shooting.

The ARX series is offered in 26 round boxes with prices starting at $27.99. The CrossTrainer series, also available in standard or +P configurations, come 51 rounds to a box with a starting price of $27.