Scalise back to work on Capitol Hill 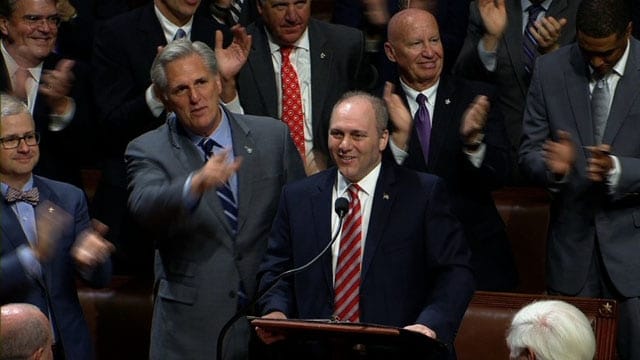 Louisiana Republican Congressman Steve Scalise returned to the House of Representatives Thursday, still on the mend from a gunshot to the hip suffered during the congressional shooting three months prior. (Photo: CNN)

“You have no idea how great this feels to be back here at work in the people’s house,” he said, per the Associated Press. “I’m a living example that miracles do happen.”

Just 10 days ago, the congressman’s recovery at a Washington D.C.-area inpatient rehab facility was ongoing and his hopes of getting back to work by the end of the month seemed all but dashed. Still, he managed to limp onto the House floor — on crutches and wearing sneakers, no less — ready to get down to business.

“I’m walking, I’m voting, I’m back to work,” he told a crowd of journalists Thursday as he made his way into the chamber.

The House Majority Whip nearly died June 14 after a lone gunman shot him in the hip during a baseball practice with fellow Republicans and staffers in Alexandria, Virginia. The team was preparing for a charity game against Democrats scheduled the following day when the shooter — a disgruntled Bernie Sanders supporter who despised President Donald Trump and the GOP — opened fire with a 7.62 mm caliber rifle, striking Scalise and four others. The gunman died  at a Washington, D.C. hospital after a shoot out with Scalise’s security detail and local law enforcement.

Scalise was rushed to Medstar Washington Hospital Center in grave condition. For the next six weeks, he cycled in and out of the intensive care unit as he underwent multiple surgeries — the last of which cleared a deep tissue infection. He was discharged in July to an inpatient rehab facility where he has been relearning to walk.

“Our prayers have been answered,” House Speaker Paul Ryan, of Wisconsin, said. ““I’m not a big crier, but I was today.”

Fellow Democrat Rep. Cedric Richmond, of Louisiana, told the Associated Press the chamber temporarily dispensed with traditional decorum — even posing for a selfie with Scalise.

“It was just a good moment, especially if you tracked his fight and the hard work he had to put in to get to this point,” he said.