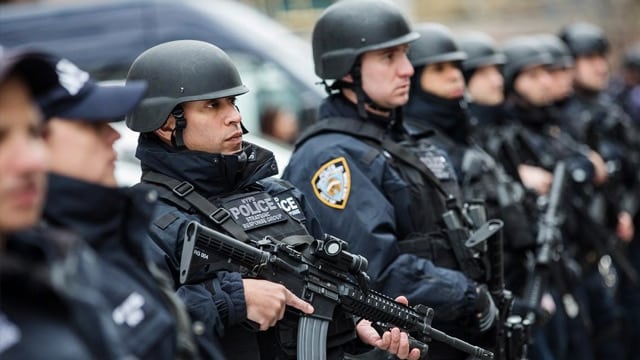 Researchers gathered data from a period in 2014 and 2015 where NYPD officers organized a work slowdown in response to a tense political fight. (Photo: Andrew Burton/Getty Images)

A new study suggests that reducing proactive policing efforts could lead to a reduction in major crime incidents.

Published in the Nature Human Behaviour journal this week, the study analyzed data gathered from the NYPD from 2013 to 2016.

“Analysing several years of unique data obtained from the NYPD, we find that civilian complaints of major crimes (such as burglary, felony assault and grand larceny) decreased during and shortly after sharp reductions in proactive policing,” wrote researchers Christopher Sullivan and Zachary O’Keeffe.

The conventional wisdom, they say, is that increasing police stops, quality-of-life summonses, and low-level arrests helps deter more serious criminal activity by showing the community that officers are monitoring the area and deviance won’t be tolerated. Additionally, a lack of proactive policing is thought to embolden criminals, leading to spikes in crime.

But the researchers note that such policing tactics diverts resources away from investigative units that may be working to track down serial offenders. Proactive efforts can also “drain social control of group-level violence,” and disrupt unauthorized markets as people are arrested, and lose their jobs – all of which creates “more localized stress on individuals already living on the edge.”

The researchers looked at data from a tense political period in New York City in late 2014 and early 2015 in which the NYPD held a “work slowdown” in response to a political fight with the mayor, followed by the killing of two officers as they sat in their squad car.

“Officers were ordered to respond to calls only in pairs, leave their squad cars only if they felt compelled, and perform only the most necessary duties,” the study says.

The researchers filed Freedom of Information requests asking for CompStat reports from 2013 to 2016. The reports document weekly activity by officers in each precinct. Then they cross referenced that data with seven of the major crime complaints issued by residents and indexed by the NYPD.

After crunching the numbers for 76 precincts, the researchers found that “civilian complaints of major crimes declined by approximately 3–6 percent during the slowdown.”

“Each week during the 2014–2015 slowdown, we estimate that 43 fewer felony assaults, 40 fewer burglaries and 40 fewer acts of grand larceny were reported,” the researchers said.

They note that further research is needed to examine the long-term effects of proactive policing, but said the slowdown by NYPD officers resulted in an estimated 2,100 fewer crime complaints.