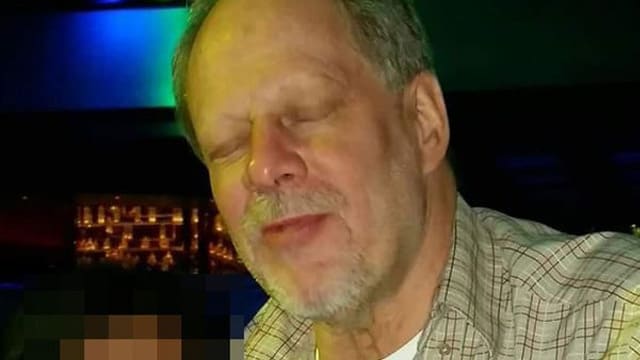 Stephen Paddock, 64, the man who police say opened fire on a crowd attending a concert at Mandalay Bay Casino in Las Vegas on Oct. 1, 2017. (Photo: Facebook)

Las Vegas police hosted the fourth press conference on Monday about the ongoing investigation into Sunday night’s mass shooting at Mandalay Bay that left 59 people dead and some 527 more injured.

Clark County Sherif Joe Lombardo said investigators found a total of 16 rifles, which could be described as assault weapons, in calibers ranging from .223 to .308 and a handgun from the gunman’s room on the 32nd floor of the casino’s hotel.

The sheriff clarified that the shooter, Stephen Craig Paddock, 64, had equipped some of the rifles with scopes and modified some of them with full-auto capabilities. “I don’t know if the sear pins have been filed down or whether they’ve been converted to fully automatic,” Lombardo said, adding the ATF is tracing the recovered firearms and should soon complete an evaluation to determine how exactly the some of firearms were modified.

SWAT teams also recovered 18 more guns, explosives and thousands of rounds of ammunition from Paddock’s home in Mesquite, Nevada, on Monday afternoon. The explosives were specifically the substance Tannerite, which is used to make commercial exploding targets. However, investigators also found ammonium nitrate stored into Paddock’s car at the hotel.

In a two-room suite the 32nd floor, Paddock had a unique vantage point that allowed him to oversee the festival and put him out of reach from responding officers. Lombardo said SWAT officers had to go floor-to-floor searching for the gunman, but once on the floor were quickly able to identify Paddock’s room.

The sheriff added that the team narrowed the search because other hotel guests had complained about noise to both security and police. As SWAT officers prepared to breach the door to Paddock’s room, Paddock fired through the closed door. Officers returned fire and then found Paddock dead from an apparent self-inflicted gunshot wound. It’s unclear if Paddock committed suicide during or before officers engaged him.

Details regarding Paddock’s motive have not been released by investigators yet. “I think it’s important to understand that this investigation is going to be long and contracted before we get to the bottom of everything associated with it,” Lombardo said. Responding to direct questions about motive, Lombardo added: “I can’t get into the mind of a psychopath at this point.”

An FBI official from the Las Vegas field office said agents did not find evidence suggesting Paddock had ties to international terror groups. The Department of Homeland Security issued a statement saying there is no credible threat to other public venues, but security officials should take precaution. Lombardo could not say if Paddock had connections to extremist groups in the U.S. either as investigators are still investigating his background. Lombardo referred to Paddock as simply “reclusive.”

Paddock checked into the Mandalay Bay hotel on Thursday with girlfriend Marilou Danley, who traveled out of the country at some point after Paddock checked in. Between checking in and Sunday, Paddock brought the weapons and equipment to his room by carrying more than 10 large suitcases. While Paddock acted alone in the attack, investigators consider Danley a person of interest. Investigators tracked her down in Tokyo and she is on her way back to the U.S. for questioning. Still, investigators are hoping to learn more about what Paddock did between checking into the hotel Thursday and Sunday night’s shooting.

Lombardo added that Paddock’s name did not appear in any criminal databases, so there were no obvious clues suggesting he had been planning an attack. “This is an individual (Paddock) who was described as a lone wolf, I don’t know how it could’ve been prevented if we didn’t have any prior knowledge to this individual. It wasn’t evident that he had weapons in his room. We have determined that there have been employees going to and fro from his room and nothing nefarious was noticed at this point,” Lombardo said.

The suspect’s brother, Eric Paddock, told reporters that he had no idea that his brother was capable of such a heinous act nor did he know that he had so many guns. “An asteroid just landed on us and on Las Vegas as far as we are concerned,” he said and echoed the authorities, saying his brother did not have a criminal record. Stephen Paddock was described as a retired accountant who liked to gamble and lived in a quiet retirement community 80 miles outside of Las Vegas. He reportedly didn’t express strong political views either.

Stephen Paddock opened fire around 10:08 pm from two different windows in his hotel room. Lombardo said Paddock had a device similar to a hammer to smash the glass. Some concertgoers at the show shared video from when gunfire initially rang out as musician Jason Aldean played on stage. Some in the crowd mistook the sound for fireworks until they realized it was gunfire and Aldean left the stage. Screaming men and women took cover on the ground at the show as rapid firing shots could be heard in the background. Images have also surfaced showing attendants hunkering down behind walls and other sources of cover.

Among the dead is a Las Vegas police officer who was off-duty and attending the concert. His name is being withheld pending notification of next of kin, police said. Two officers on duty at the time of the shooting were injured. One was listed in critical condition has been upgraded to stable. The other suffered non-life threatening wounds.

The number of victims was upgraded a number of times, but each announcement had been prefaced that the figures are approximations. Most recently, Lombardo said 58 people were dead and some 515 injured. The victims have been taken to five different hospitals in the Las Vegas area.

Lombardo said SWAT officers will execute a search warrant on property owned by Paddock in northern Nevada later Monday. He and other officials will host another press conference Monday night.

Staff Writer Chris Eger contributed to the reporting of this article. Updated at 9:19 pm EST on Oct. 2, 2017.