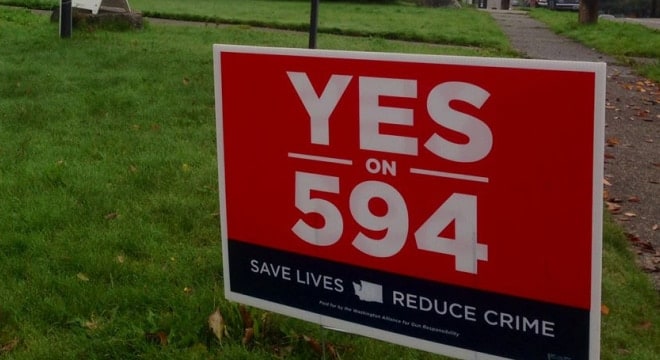 The argument heard this week centered on I-594, a 2014 voter referendum that expanded background checks to cover virtually all gun transfers in Washington. (Photo: Alliance for Gun Responsibility)

The suit, filed just weeks after the controversial referendum was approved by voters by a nine-point margin, was brought against state Attorney General Bob Ferguson and Washington State Patrol Chief John Batiste by groups to include the Second Amendment Foundation, the Northwest School of Safety and the Firearms Academy of Seattle. Rejected in 2015 by a lower court, the panel heard this week heard both sides of the challenge.

David Edwards, representing the gun rights groups, argued the 18-page voter initiative was poorly drafted and confusing, blocking firearms transfers at shooting ranges and in personal loans. When prompted by the panel to explain, Edwards said the Firearms Academy of Seattle, over concern of the reach of the new background check law, has since suspended loaning guns to those seeking training at their facility.

Edwards highlighted other, possibly unintended problems, that the measure has caused including that those traveling to the state on commercial flights with a gun would have to pass a background check to get their checked firearm back from the airline.

Jeff Even, with the Washington Solicitor General’s Office, told the panel the gun groups had “purely abstract and hypothetical” claims and lacked standing to challenge the statute since they had never been prosecuted under the new law.

The referendum, I-594, was backed by over $10 million in funds from billionaire philanthropists and gun control organizations but left both vagueness and non-compliance in its wake after it was approved by voters in 2014. This led lawmakers to make a series of modifications to the law earlier this year over lingering concerns.

Backers of the initiative made clear they felt the ongoing lawsuit was unfounded. “The courts upheld Initiative 594 once already, and now two years later, we have even more evidence that the hypothetical situations in question are exactly that–hypothetical,” said Renée Hopkins, CEO of the Alliance for Gun Responsibility. “Since the initiative became law, we’ve seen smooth adoption by gun owners and dealers. The law is doing exactly what it was intended to do—help keep guns out of dangerous hands.”

Alan Gottlieb, SAF founder, said the low rate of prosecutions in relation to I-594 is all the proof needed to show it doesn’t work. “Millions of dollars spent by the gun prohibition lobby to pass this ballot measure and only two prosecutions in over a two-year period?” Gottlieb told Guns.com. “And they both could have been prosecuted under the prior law. Proof that this was only aimed at law-abiding gun owners.”

The panel, made up of Judges Richard Clifton, John Owens, and Kim McLane Wardlaw, is expected to rule on the case this winter.