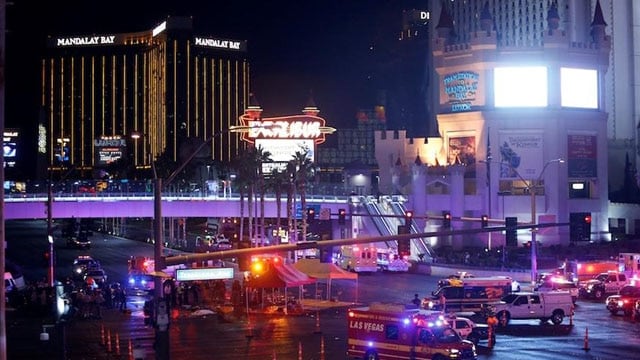 Gun stocks for major manufacturers rose more than 4 percent in the wake of the Las Vegas shooting.

Mass shootings and terrorist attacks — both stateside and internationally — often trigger an increase in gun sales. Dealers saw an unprecedented influx of customers last year in the weeks after the Orlando nightclub massacre on June 12, 2016 killed 49 people and wounded more than 50 others.

The massacre in Las Vegas late Sunday unseated the Orlando tragedy as the deadliest mass shooting in American history. At least 59 people died and more than 500 were wounded when a lone gunman opened fire from the windows of his suite at the Mandalay Bay Resort and Casino onto a country music festival 32 stories below.

Authorities said the shooter — 64-year-old Stephen Paddock, of Mesquite, Nevada — left few clues behind suggesting motivation for the premeditated attack. A retired accountant and avid gambler, law enforcement said Paddock stocked his hotel room with nearly two dozen guns, including some rifles with scopes and others converted into automatic weapons, over four days before firing on more than 22,000 concertgoers gathered at the Route 91 Harvest Festival.

Police recovered another 19 firearms from Paddock’s home in Mesquite — located an hour north from Las Vegas — and found material used to make explosives in his car.

Christopher Sullivan, the general manager of Guns & Guitars in Mesquite told the Associated Press the shooter legally bought firearms from his store and never showed signs of instability. A second dealer in Utah said Paddock bought a shotgun from his store back in February.

“There were no red flags.” said Chris Michael, owner of Dixie GunWorx in St. George, Utah. “I had no idea he would be capable of this.”

Police said Paddock modified some of the firearms to create fully automatic weapons, which remain heavily regulated by the federal government. Those manufactured before 1986 require additional licensing for private ownership while federal law bans ownership of newer models for civilians.