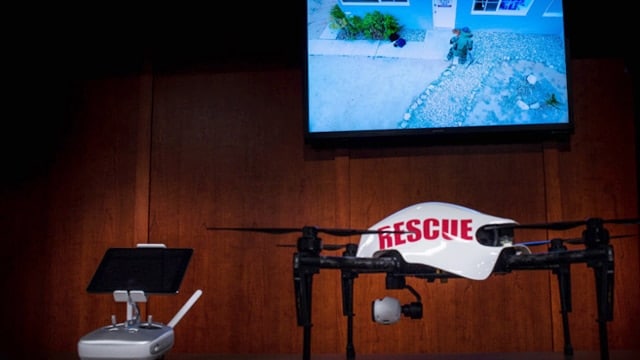 Los Angeles County Sheriff Jim McDonnell showed off the $10,000 drone back in January, when they first acquired the device. (Photo: Sarah Reingewirtz/Pasadena Star-News)

Los Angeles County Sheriff Jim McDonnell is defiant, saying he won’t ground his department’s drone program even after a civilian oversight group voted last week to do just that.

In a 5-4 vote Thursday, the department’s Civilian Oversight Commission voted to end the drone program, which started back in January, over fears the Unmanned Aircraft System could be used to spy, or could one day be armed, according to the New York Daily News.

Per department policy, use of the $10,000 drone is limited to emergency, life- threatening situations, such as hostage rescue, bomb detection, active shooter and HazMat spills, according to a supplemental report drafted by the oversight board. McDonnell said his department’s use of the drone has been proper.

“We have used the (drone) judiciously, only five times since the program launched nine months ago,” he said. “These include two search-and-rescue missions for a missing five-year-old Pasadena boy, one search-and-rescue for a missing woman whose car was found in Malibu and two active shooter situations where the (drone) allowed for the safe search for additional victims.”

“In each of these situations, the (drone) was deployed only in circumstances that met the strict criteria of our department policy and FAA regulations,” McDonnell said.

But one group doesn’t trust law enforcement to use drones solely for good. The Stop LAPD Spying Coalition put together a “top ten” list of lies they say authorities are spreading on the issue. “History has shown that the community cannot rely on the assurances and stated intentions of the LAPD,” said number three on the list, which seeks to debunk a claim that drones used by law enforcement will never be armed.

The LAPD acquired two drones in 2014, but public backlash over potential surveillance shelved the flying cameras. The department presented a plan in August to deploy a drone program and held four public hearings. Hamid Khan, with the Stop LAPD Spying Coalition, applauded the Civilian Oversight Commission’s ruling on Thursday.

“We definitely are feeling good that the Sheriff’s Civilian Oversight Commission did the right thing,” Khan said after the vote.

Both groups are worried that law enforcement could arm the drones. “The Sheriff should explicitly and unequivocally state that he has no intention of arming or allowing the arming of any (drone) operated by the LASD,” said the number one recommendation in the supplemental report drafted by the oversight commission.

And the sheriff has done just that, saying, “it is unarmed, will remain unarmed, will not be used in any manner that violates the constitutional rights of individuals.”

“While the UAS technology is not particularly new, its use by law enforcement organizations is,” said the commission’s report. “Moreover, use by the United States military of much larger armed unmanned aerial vehicles (UAVs), or drones, is well known to the public and understandably unnerving to anyone who distrusts law enforcement.”

“Unfortunately, a significant number of individuals in our community and nationally simply do not trust law enforcement,” the report said.

McDonnell said he respects input from the commission, but noted the drone program “is too important as a public safety tool,” and will not stop using it. “I will not face the loved ones of a victim whose life could have been saved by our ability to deploy (a drone),” he said.