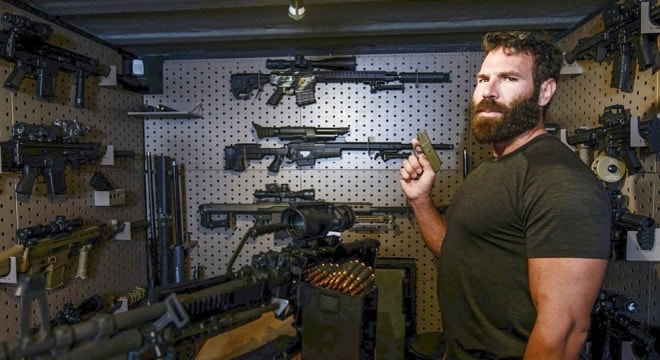 Bilzerian, seen gunning it up, posted two videos Sunday from the scene of the Route 91 Harvest Fest shooting in Las Vegas, which has since be deleted (Photo: Instagram)

In a pair of Snapchat videos uploaded to Twitter, since deleted, a heavily bearded Bilzerian is seen speaking to the camera as rapid-fire gunshots ring in the distance. He related a shooting he says he saw first hand.

“Holy fuck this girl just got shot in the fucking head,” he said in the first video. In the second, Bilzerian says he grabbed his handgun and went back to the event.

Meyer, 29, the second youngest living Medal of Honor recipient for his actions in Afghanistan in 2009, took to Facebook to ridicule Vegas-fixture Bilzerian, who he says he once respected.

“Dan Bilzerian is a coward,” said Meyer. “Either A) he’s a liar and looking for followers or B) he’s a coward because he just passed someone who is hurt– and he has millions of followers! This is why our children should not rate people by the followers they have, or the videos, the girls, or the guns they have around them.”

Meyer tempered his words by saying he wouldn’t be so critical on Bilzerian if he wasn’t always “trying to play operator.”

Closing, the Marine coached Bilzerian to “stop putting on cool shit and stop trying to be somebody that you’re not. Just be who you are.”

Bilzerian, who was removed from U.S. Navy SEAL training in 2000 over safety violations after making it “99 percent” through, made a name for himself as a professional poker tournament shark and playboy. He has been called by GQ, “Bruce Wayne-meets-Hugh Hefner” with “Marvel Comics origins.”

Bilzerian has 1.46 million Twitter followers, where his most recent message as of Tuesday was a Sept. 27 memorial to Hefner while his Instagram account, tracked by 22.8 million users, features him shirtless administering a Karate Kid crane kick during a sparring session as the latest post. Neither page addresses the shooting or responds to Meyer’s comments.

Bilzerian explained to People magazine he took two injured women to the hospital from the scene and was later sighted by several returning to the scene helping to care and comfort others.

In a SnapChat video posted Tuesday, Bilzerian also explained he took 8,000 pounds of food and water to hospitals in Vegas in the aftermath of the Route 91 shooting and reiterated that the first thing he did after leaving the carnage Sunday to grab his gun and drop off the two injured women was to return to the scene where he remained for three hours assisting as best he could.

In addressing remarks that he fled the active shooting, Bilzerian argued he was logically running for cover while under fire and if he and others would have remained  “We’d probably have 600 dead.”