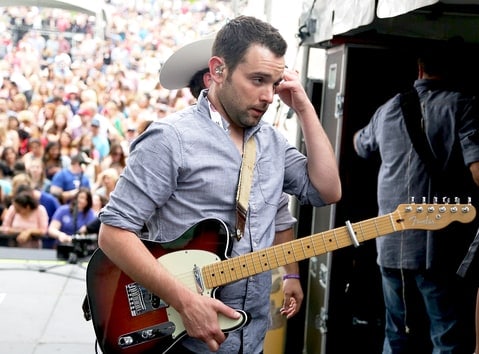 A musician who performed at the Route 91 Harvest Festival in Las Vegas said he has changed his mind about gun control after the mass shooting on Sunday night.

Caleb Keeter, a guitarist for The John Abbott Band who performed just hours before 59 people were killed and more than 500 injured in the worst mass shooting in modern American history, posted a statement to Twitter Monday proclaiming he now believed in stricter gun control laws after the massacre.

“I’ve been a proponent of the 2nd Amendment my entire life,” Keeter said. “Until the events of last night. I cannot express how wrong I was. We actually have members of our crew with CHL license, and legal firearms on the bus.

Keeter went on to explain that he and other members of his group chose not to retrieve their guns, as they thought that would only make the situation worse and more confusing for law enforcement.

“We couldn’t touch them for fear police might think that we were part of the massacre and shoot us. A small group (or one man) laid waste to a city with dedicated, fearless police officers desperately trying to help, because of access to an insane amount of fire power.”

The guitarist said he even wrote goodbye notes to his parents and partner, thinking he would not make it out alive. He also went further in describing the firepower used in the attack.

“These rounds were powerful enough that my crew guys just standing in a close proximity of a victim shot by this fucking coward received shrapnel wounds.”

Keeter continued: “We need gun control RIGHT. NOW. My biggest regret is that I stubbornly didn’t realize it until my brothers on the road and myself were threatened by it. We are unbelievably fortunate to not be among the number of victims killed or seriously wounded by this maniac.”

The musician was just one among a veritable chorus of people calling for stricter gun laws after the tragedy. Democrats in Washington have been particularly vocal, honing in on the Sportsmen’s Heritage and Recreational Enhancement Act, or SHARE Act, which includes a provision that would loosen regulations on suppressors.

Top Democrats and gun control groups have also urged the passing of legislation that would expand background checks for gun purchases. Some have even called for an outright ban on all assault weapons.