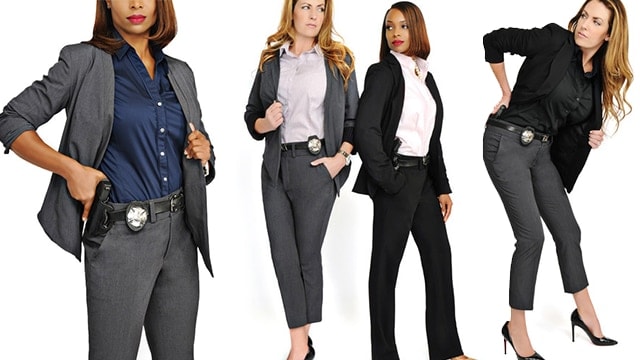 Alisha Shoates-James holds up a black suit pant, detailing the efforts behind Ten-Four Clothing — the apparel line designed specifically for professional women who conceal carry. As a member of the law enforcement community with over a decade behind the badge, Shoates-James knows the lack of options women face when they strap on a holster and gun.

“Obviously being a cop, a lot of folks would tell me just get a men’s small and don’t worry about getting a ‘woman’s fit.’ But this stuff was not fitting.” Shoates-James told Guns.com in FaceTime interview. “I felt like females shooters needed to have a place where we can get what we need.”

Built on a strictly female foundation, Ten-Four Clothing provides business attire tailor made for women who pack a little more than chapstick. As the owner and visionary behind the Tennessee-based clothing company, Shoates-James has spent the past two years perfecting the brand that caters exclusively to women with guns. Shoates-James and her team have put in the work — diligently researching women’s professional attire and dissecting what improvements could be made to make business fashion more firearm functional.

“I ripped apart everything about professional attire and concealed carry. I tore it apart and filled in the gaps,” she said. “I really wanted to make my clothing functional.”

The result is an array of suit jackets, pants and skirt styles able to withstand the rigors and challenges of concealed carry.  All pants and skirts boast a wide waistband with belt loops to easily accommodate inside-the-waistband and outside-the-waistband belted holsters. Featuring real pockets in the front, a rarity in women’s fashion, the pants are designed to be both flattering to the figure but functional for firearms. Suit jackets come in two styles —a traditional button and a buttonless design. Blazers are cut longer than average jackets, providing more firearm coverage when bending and moving. The suit jackets also tout interior pockets for law enforcement credentials, badges, cellphone and other accessories.

Though Shoates-James said the idea spawned as a result of her experience in law enforcement, hence the name Ten-Four, the clothing line and brand are not laser-focused on the LE community, but rather aiming to provide women of all backgrounds with the means to pack a pistol.

“It’s not just about women in law enforcement,” she added. “It’s about any woman who carries concealed who needs a nice dress pant.”

With more women entering the shooting sports, it’s no surprise that they’re looking for more options to effectively carry. The National Shooting Sports Foundation concluded in a 2015 report that women are the quickest growing contingent of gun owners, saying more women who own guns are buying more guns and related accessories. The results illustrated that women are primarily purchasing guns for protection and 42 percent claimed concealed carry permit status. Though Ten-Four looks to capitalize on this growing and often overlooked demographic, Shoates-James emphasizes that her brand is fixated more on female empowerment and community than profit margins. “Ten Four is doing it for the women,” Shoates-James passionately emphasized. “Women are carrying more than ever before. It’s not taboo anymore. A lot of what I do in the community and when I go to speaking engagements is about empowering women.”

She added, “Ten Four is about women empowerment and I want to build on that in the next six months.” The company intends to do just that, with plans to drop new blazers in addition to an all-new line of motivational t-shirts in the coming months.

Officially launching a Kickstarter campaign in early September, the company has seen moderate interest in the product so far. As the online, crowd-funded campaign draws closer to an end with only a little over $2,000 of its original $30,000 goal, Ten-Four plans to forage ahead, regardless of whether the goal is met in its remaining weeks. While the company’s own webpage is currently undergoing an overhaul preparing to offer more goodies and updates for consumers in the near future, in the meantime, Shoates-James says she’s happy with where Ten-Four is.

“It feels really good to be in a zone where we have a solid product that fills a gap and especially has an important population of female shooters.”