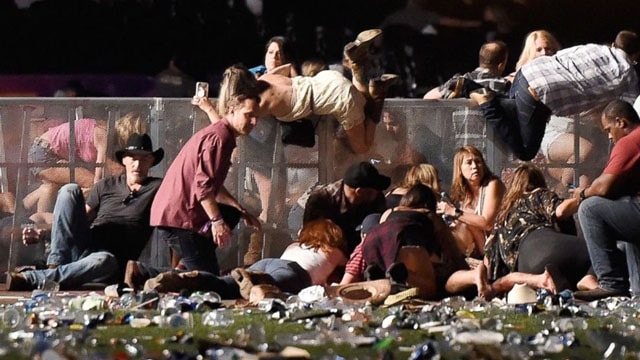 Snyder said the bump stocks “simulate automatic fire,” though she didn’t identify which firearms from Paddock’s arsenal of rifles, shotguns and handguns were used in the shooting.

Authorities still don’t know why Paddock, a retired accountant and prolific gambler, opened fire from the 32nd floor of the Mandalay Bay, killing 59 and wounding more than 500 others gathered on the strip below for the Route 91 Harvest Festival. Paddock killed himself before the Las Vegas Metropolitan Police Department could enter his hotel room, leaving behind few clues as to his motivations.

“I don’t have a lot of answers yet,” Undersheriff Kevin C. McMahill told media during a press conference Tuesday as he pleaded for ongoing patience during the investigation. “We have a responsibility to get it right.”

The department released a compilation of body camera recordings captured during the shooting Tuesday showing officers directing civilians to safety — bursts of gun fire notably audible in the chaotic footage.

McMahill said Paddock installed security cameras in the hallway and the peephole of his hotel room door “so he could see law enforcement and security approaching.” He confirmed crime scene photos of the shooter’s suite leaked to media earlier Tuesday were authentic.