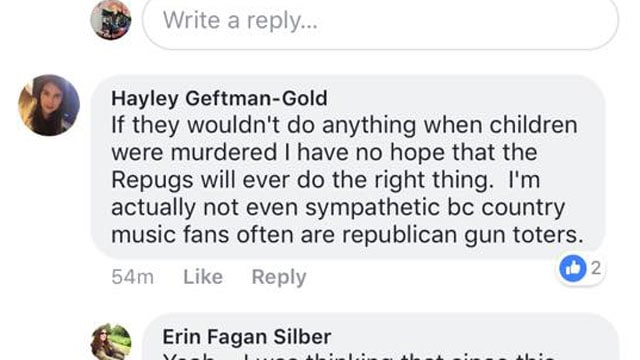 CBS announced Monday that a legal executive for the company was let go following what was deemed “deeply unacceptable” comments on social media about the victims of a mass shooting in Las Vegas over the weekend.

“If they wouldn’t do anything when children were murdered I have no hope that Repugs will ever do the right thing. I’m actually not even sympathetic bc country music fans often are Republican gun toters,” Hayley Geftman-Gold wrote on a Facebook post, which has since been deleted.

According to her Facebook page, Geftman-Gold was the Senior Counsel of Strategic Transactions for CBS, and had been with the company for about a year. CBS, however, determined that Geftman-Gold’s comments violated the company’s standards, and, as such, she is no longer employed by CBS.

“Her views as expressed on social media are deeply unacceptable to all of us at CBS. Our hearts go out to the victims in Las Vegas and their families,” the company said in a statement.

Altogether, 59 people were killed and more than 500 injured when a lone gunman opened fire from the 32nd floor of the Mandalay Bay Hotel onto unsuspecting victims attending an outdoor country music concert below. The motive for the attack remains unclear.