Donations, support pour in for victims of Las Vegas shooting 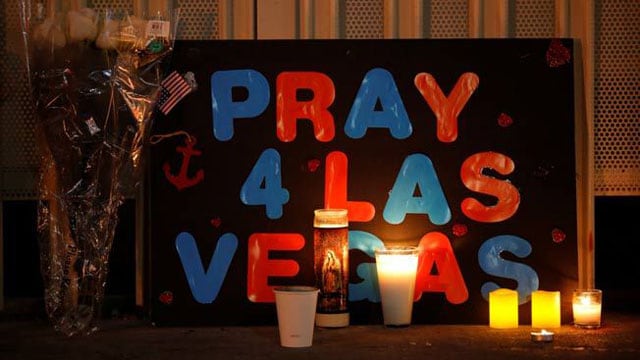 An overwhelming amount of support for the victims of the Las Vegas shooting has been shown in the form of monetary, food, and blood donations – all of which are much needed. (Photo: Reuters)

Victims from Sunday night’s mass shooting in Las Vegas have received an unprecedented outpouring of support, receiving more than $8.3 million in donations.

Clark County officials set up a GoFundMe campaign on Monday with the goal of raising some $800,000, but within 24 hours donataions totaled more than 16 times the original goal.

“I’m overwhelmed by the outpouring of support from the Las Vegas community & beyond,” Clark County Commission Chair Steve Sisolak wrote in a tweet Monday afternoon, adding “every penny will be put to use.”

By early Wednesday morning, nearly 64,000 individuals, businesses and corporations donated to the campaign, beginning with Sisolak’s pledge of $10,000. So far, MGM Resorts provided an “amazing” donation of $3 million, an anonymous donor pledged another $500,000, The Cosmopolitan resort and its CEO Bill McBeath donated  $250,000 donation, and GoFundMe pledged to give $150,000 to the fund for the victims.

Outside the campaign, Vegas entertainer Wayne Newton and his wife, Kathleen, donated $100,000 and the NFL Foundation, as well as the Raiders, gave “generous donations” to the fund.

“Your support will be long remembered,” Sisolak tweeted.

“On this tragic day we are heartbroken but gratified to see the world rally around our community with so much support and love,” the company wrote on a Facebook post announcing their assistance.

According to reports from local media, the airline’s maintenance staff at McCarran International Airport provided a safe overnight shelter for more than two dozen people who ran from the site of the concert as gunfire erupted. Airline staff provided them with clean clothes and helped charge their phones and contact loved ones.

Likewise, officials asked for blood donations after the shooting, and the response was “overwhelming.” In fact, Las Vegas Assistant Sheriff Todd Fasulo said in a press conference Monday night no more donations were needed at this time.

“They cannot take any more people right now,” Fasulo said of the blood donation centers. “They have enough supply to last them for the foreseeable future.”

Furthermore, Fasulo said the police department does not have the resources to deliver or distribute the amount of food that has been donated to the community, and asked that bottled water be donated to the Red Cross. Fasulo also encouraged those who wish to help to consider donating to the fund started by Sisolak.